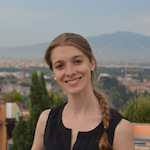 Skye Shirley is a teacher, presenter, and spoken Latin enthusiast whose immersive lessons embrace the most recent and convincing research into second language acquisition. As an instructor of the LLiRHS program last summer, she led tours of ancient sites, directed skits, applied methods such as TPR and the Natural Method in her teaching, and even provided Latin yoga classes in the evenings! Her lesson plans have appeared in several publications, including "The Shooting Star Newsletter" and Activitates Liberīs. She has presented on pedagogical topics both in the United States and abroad, most recently at the Pontificia Universitá della Santa Croce in Rome. She graduated with a BA from Boston College in 2010 and currently is pursuing a Masters in Latin and Classical Humanities at the University of Massachusetts, Boston. She currently teaches Latin and Classical Roots to students in grades 5-12 at Newton Country Day School in Newton, Massachusetts.