In one of the most moving scenes from his Confessions, St. Augustine of Hippo relates the death of his mother, St. Monica.

Following Augustine’s conversion to Christianity in Milan, the two are journeying back to Africa with other family members, and have come as far as Ostia, the port city of Rome, when Monica becomes ill.  As her condition worsens, Monica tells her two grief-stricken sons, “Ponitis hic matrem vestram.”1  When Augustine’s brother expresses the hope that she be able to die in her own

country, instead of the unfamiliar stopping-point in the middle of their journey, Monica responds:

Other visitors, however, continue to express to Monica the same concern about her final resting place, “quarentibus…utrum non formidaret tam longe a sua civitate corpus relinquere.”3  To these well-intentioned friends,Monica delivers a profound reply:

Just as Monica never returned to her native Africa before her death, her body has also remained across the sea from her earthly home.  She was originally buried in Ostia in the church of St. Aurea, with an epitaph written by the fifth-century Roman consul Anicius Auchenius Bassus:

Later, in the fifteenth century, her body was moved to Rome, and now rests in the Basilica di Sant’Agostino, a fifteenth-century church in the care of Augustinian friars, who live according to the rules for community life set down by their namesake.  Within the church, whose early-Renaissance façade was built with travertine from the Colosseum, the chapel of St. Monica is found just to the left of the main altar.

While God would recognize under any circumstances the place to find Monica at the end of the world, as she professed so confidently, mere mortals also are interested in visiting her tomb.  For their sake, then, the place admits no ambiguity as to its significance.  The chapel’s altar, which contains the urn holding her remains, is inscribed: “Hic iac. corpus S. M. Monicae,” or “Hic iacet corpus Sanctae Mulieris Monicae.”7  On the wall directly above this altar is a painting, dating from the same mid-eighteenth century restoration as the altar, of Monica and Augustine with the Virgin Mary, depicted here as “Mother of Consolation.”  This is certainly an appropriate assembly of figures, given the years of sadness Monica spent hoping for her son’s conversion.  Some of her words to Augustine in the Confessions show just how much consolation she drew from her son’s reformed life:

The rest of the chapel’s artwork continues to draw on the Confessions to depict Monica’s life of pain and ultimate consolation.  On the left wall, two frescoes show Monica’s patience and hope in the midst of her suffering over Augustine’s youthful waywardness, as described in Book Three.  The painting closer to the altar entrance shows Monica being consoled by a bishop, unnamed by Augustine, who once offered her the consoling words: “fieri non potest, ut filius istarum lacrimarum pereat.”9 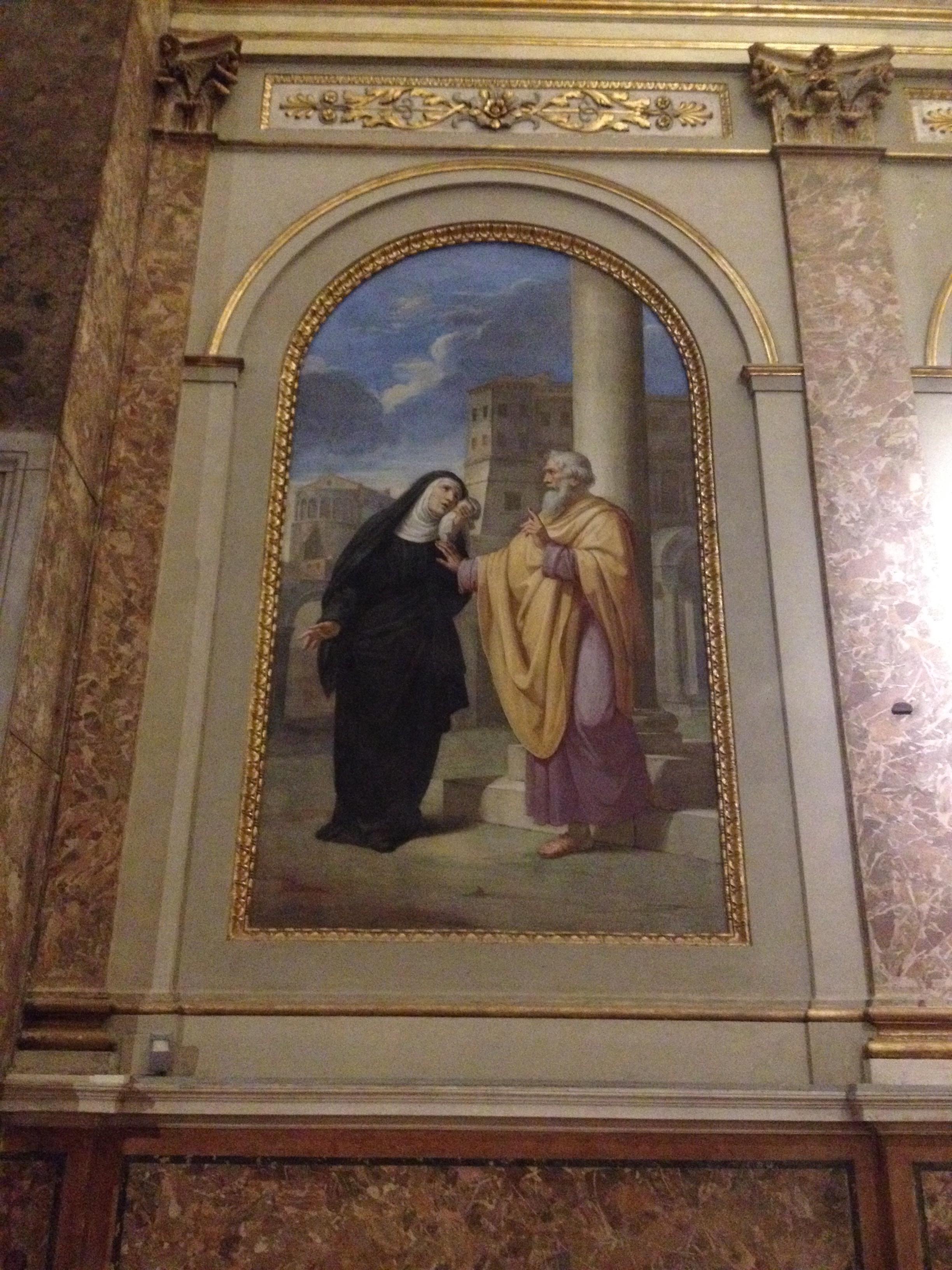 The other painting of Monica’s patient suffering over her son is also drawn from Confessions Book Three.  The painting shows a dream she had, in which an angelic figure foretold Augustine’s conversion.  The painting is laid out exactly as Augustine describes the dream: “illud somnium, quo eam consolatus es.”10 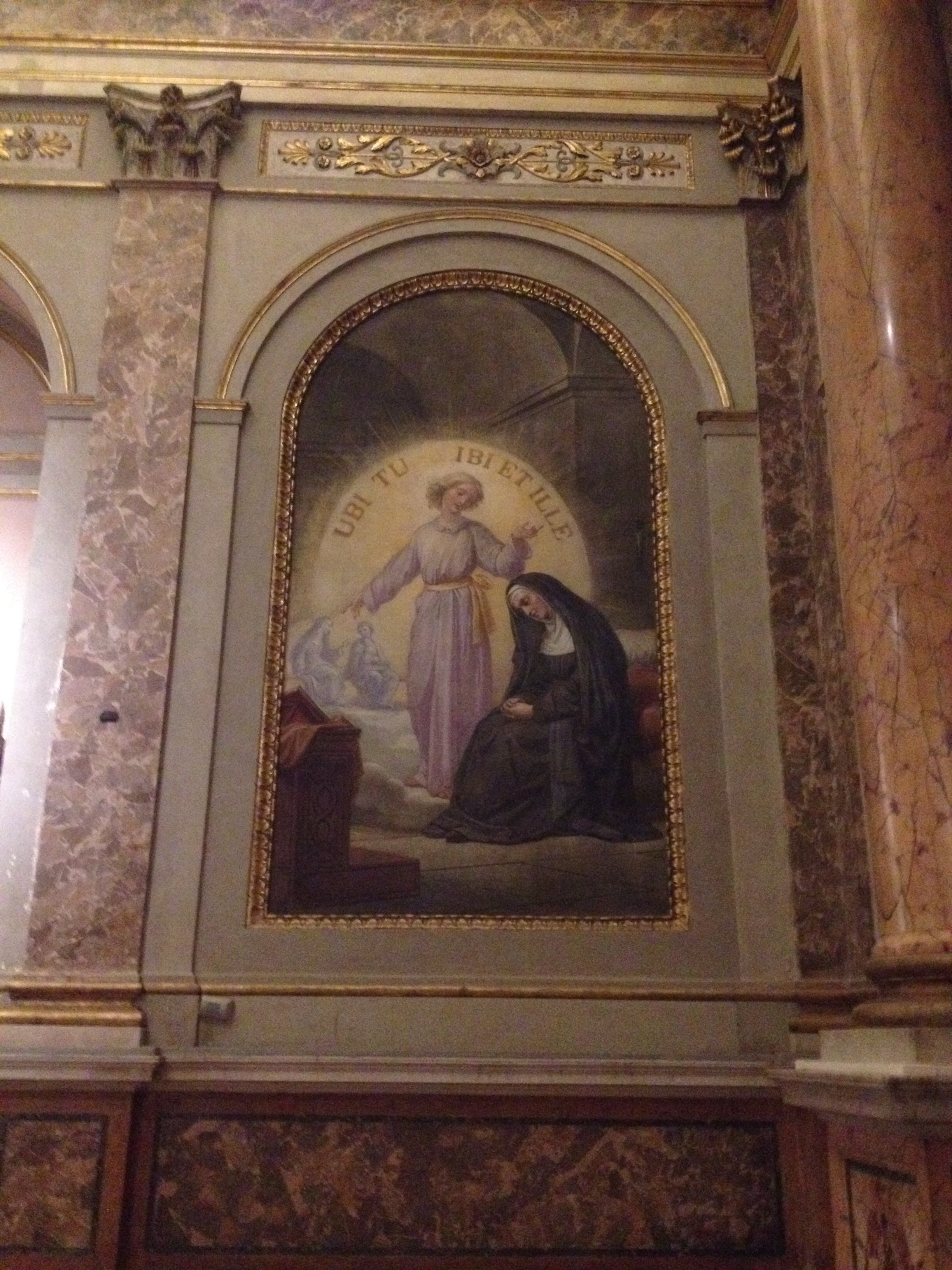 The paintings opposite these two on the right side of the chapel show the happier side of Monica’s story, the part following Augustine’s embrace of Christianity.  In the painting by the chapel’s entrance on this side, Monica hears the news of her son’s conversion.  Her hands are clasped in joy, and Augustine points to the crucial verse from Scripture that inspired his change of heart.  The open book is held by his friend Alypius, who was the first to hear the news and who accompanied him to bring word to Monica. 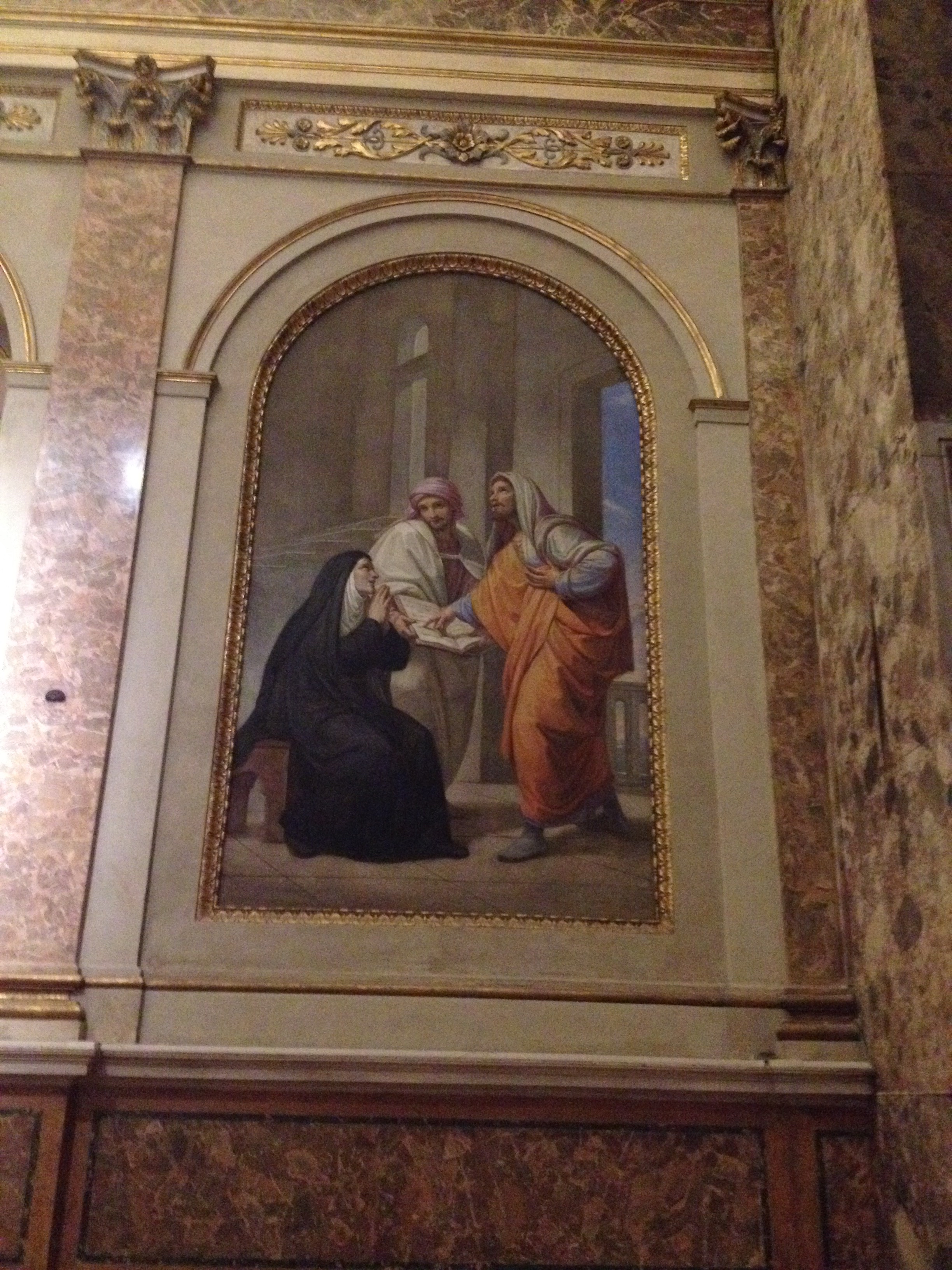 The fourth and final painting on the chapel walls shows Monica’s death, already described above, faithful, satisfied, surrounded by her devoted sons and other friends in her final hours: 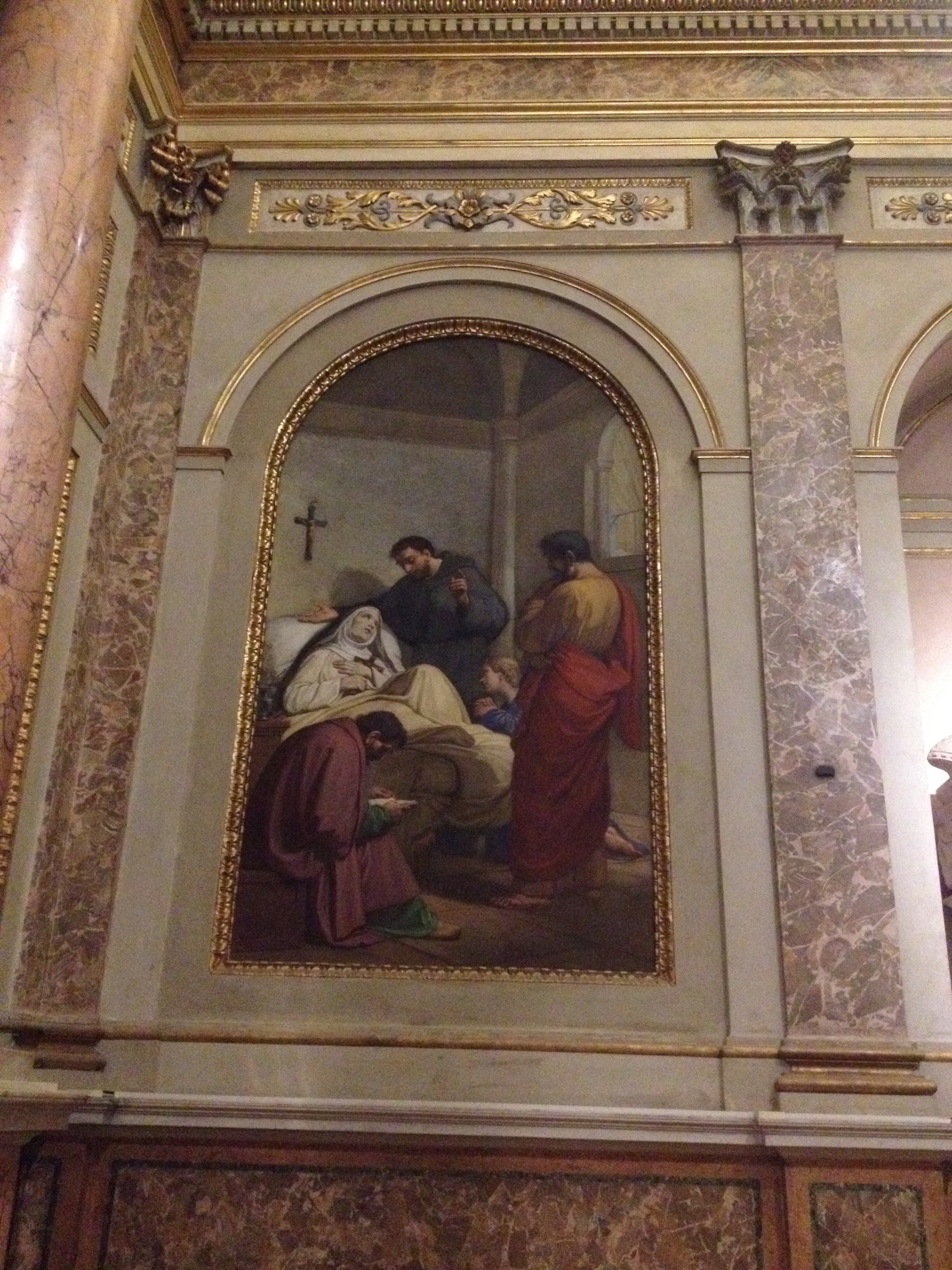 This chapel serves as a fitting monument in Monica’s honor, and also ensures that her final wish, “ut ad domini altare memineritis mei,” can scarcely be neglected in at least one place.  It also demonstrates quite clearly that the greatest monument to commemorate her life is no physical structure, but Augustine’s own words of praise in the Confessions, which today tell us all we know about Monica.  Quite naturally, the chapel praises Monica through the Confessions, and itself becomes an indirect homage to that great treasure of Latin literature.  As lovely as this shrine might be, Augustine words for his mother, “quae me parturivit, et carne, ut in hanc temporalem, et corde, ut in aeternam lucem nascerer,”14 provide a yet more beautiful and inveterate tribute.

2 “Bury this body anywhere.  Let nothing disturb with concern.  I ask of you only this, that you remember me at the altar of the Lord, wherever you may be.” (9.11)

3 “[Those visitors] asking whether she was not afraid to leave her body so far from her own city.” (9.11)

6 “Here the most virtuous mother of offspring, the other light of your merit, has buried her ashes, O Augustine, you who, guarding the heavenly laws of peace as a priest, instruct the people entrusted to you in upright living.  A greater glory of your deeds, a happier mother of children, crowns you with praise of virtues.”  (Anthologia Latina, I.670)

7 “Here lies the body of the holy woman Monica.”

8 “There was one reason that I wanted to remain a little longer in this life: so that I would see you a Christian Catholic before I died.  My God has granted this to me in heaps, such that I even see you as his servant, having disdained earthly pleasure.  What am I doing here?”  (Conf. 9.10)

11 “She saw herself standing on some plank of wood and a radiant, cheerful youth coming towards her and smiling at her, though she was mourning and consumed with grief.  When he asked of her the reasons for sorrow and daily weeping (for the sake of teaching, as he was accustomed to do, not of learning), and she responded that she wept over my ruin, he told her of this, by which she might rest assured, and advised her to look and see that where she would be, there also would I be.  When she looked at what he pointed out, she saw me next to her, standing on the same wooden plank.” (Conf. 3.11)

12 "From there we go to my mother, we tell her the news: she rejoices.  We recount to her how it happened: she leaps for joy and celebrates.  She was praising you, who are able to do more than we seek or understand, for she saw that so much more had been granted to her concerning me, that she was accustomed to seek with her mournful, tear-filled laments." (Conf. 8.12)