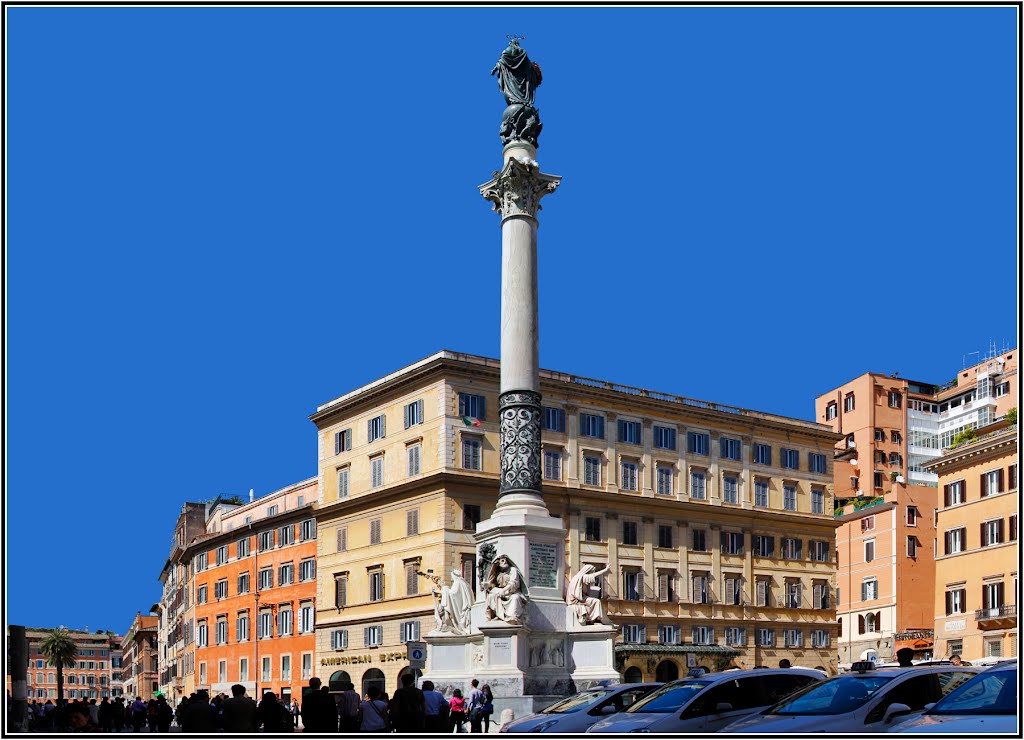 Around the corner from the Spanish Steps, a few paces from the madness of Audrey Hepburn’s quintessential Roman spot, stands a marble monument topped by a tall, slender column. Always noticed for its height, yet not often closely examined, the Colonna dell’Immacolata is a monument that is particularly Roman in its composition: an ancient column found in the late Renaissance, atop a Baroque base, meant to memorialize a 19th century dogma of the Catholic church that had been debated since the medieval period.

I say particularly Roman because, to me, Rome is an amalgam of this multitude of time periods; Rome is layers of ancient, medieval, renaissance, baroque--jumbled in together, not necessarily in perfect, clear chronological order.

The Colonna dell’Immacolata, the Column of the Immaculate Virgin, was erected on this spot in 1857. Pius IX had established the dogma of the Immaculate Conception of the Virgin Mary on December 8, 1854. The Catholic Church now officially defined that the Virgin Mary “was preserved immaculate from all stain of original sin” (Pope Pius IX, Ineffabilis Deus). In layman’s terms, the Church now confirmed that Mary, upon her conception in the womb of her mother, St. Anne, was spared from the taint of Eve’s original sin. Mary was spared “by a singular privilege and grace of the Omnipotent God” (Pope Pius IX, Ineffabilis Deus): Mary is the only person to have been given the privilege of being born without sin. Pope Pius IX’s definition of the dogma laid to rest a question that had been debated since the 500s. (1)

In the year following Pius IX’s definition, he began considering the construction of a physical testament to this monumental dogma. He settled on the location in Piazza Mignanelli, directly in front of the Spanish embassy to the Holy See (2), to honor Spain’s exertions on behalf of the dogma in the years leading up to 1854 (Latin Inscriptions of Rome, 313). As fate would have it, an ancient column had been found in a church nearby that was particularly auspicious for this monument.

In 1777, an ancient Corinthian column of cipollino marble was discovered in the grounds of the monastery of Santa Maria della Concezione (3). Upon its discovery, the column was intended to be erected in Piazza Montecitorio; however, these plans were never carried out, and the column lay forgotten in the monastery until Pius IX had the idea for a monument to the Immaculate Conception (Companion Guide to Rome, 241). The column was in immaculate (excuse the pun!) shape, and its use in Pius IX’s monument drew an important symbolic connection to the church in Rome that celebrated Mary’s Immaculate Conception long before the definition of the dogma.

The church, located on the Via Veneto in Rome, has the full name of Santa Maria della Concezione dei Cappuccini. It was commissioned by Pope Urban VIII in 1626, likely due to the fact that the Pope’s brother, Antonio Barberini, was a Capuchin friar. The Ordo Fratrum Minorum Capuccinorum (4) is a part of the Franciscan Order of the Catholic Church; before the definition of the dogma in 1854, those of the Franciscan Order were generally in favor of the dogma, while those of the Dominican Order generally opposed it. Pope Urban VIII’s commission of a church honoring the Immaculate Conception offered strong support to those in favor of the dogma during a time when the debate of the dogma was particularly heated.

With an understanding of how strong and influential Pope Urban VIII’s support of the dogma was during his lifetime, it makes sense that Pope Pius IX would choose to reappropriate the ancient column found on the grounds of this particular church. Pope Pius IX hoped that his followers would see Pope Urban VIII as a historical precedent for his own support and eventual definition of the dogma.

Pope Pius IX hired the sculptor Luigi Poletti to design the base of the monument and the four statues that would surround it (Companion Guide to Rome, 241). In turn, Poletti hired four different sculptors to each make one: David (Adam Tadolini), Isaiah (Salvatore Revelli), Ezekiel (Carlo Chelli), and Moses (Ignazio Jacometti). The selection of these four biblical figures for this monument is somewhat strange: each of these men foretold of the Virgin Birth of Jesus (not of the Immaculate Conception of Mary). Each man is paired with an inscription in Latin of a passage from the Bible that describes their foretelling: 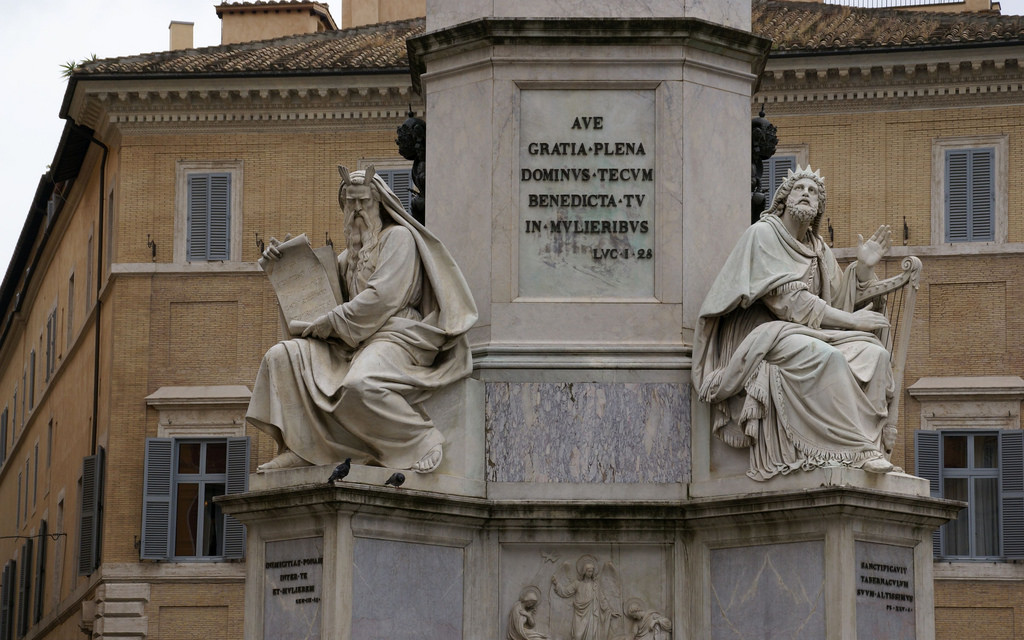 It is possible that Poletti chose these figures to highlight the fact that Mary remains a virgin throughout her entire life, that her perpetual virginity is another virtue, in addition to her Immaculate Conception. Still, it’s quite bizarre that the monument is to the Immaculate Conception, yet these inscriptions and figures celebrate something else entirely; these four statues complicate the simplicity of the message of this monument.

The statue atop the column is one of the Virgin Mary, by Giuseppe Obici. Mary stands atop a crescent moon and is stomping on a snake. The snake symbolizes the snake that tempted Eve in the Garden of Eden; by stepping on it, Mary is rejecting original sin. This statue, too, seems out of sync with the monument to the one unstained woman, Mary: Obici used his mother-in-law, a woman quite notorious in Rome for her behavior, as the model for this figure.

The base of the monument also includes four reliefs in marble that show the annunciation, Joseph’s dreams, the coronation of Mary in heaven, and the definition of the dogma. These reliefs stand as evidence that the monument intended to more broadly praise the Virgin Mary, rather than focus only on her Immaculate Conception; in this light, the biblical figures who portended the Virgin Birth make slightly more sense.

Upon Poletti’s completion of the base, the column needed to be raised atop it. 220 firemen assisted in the erection of the column, and to this day, firemen continue to be intimately involved with the monument. In 1929, the firemen of Rome placed a wreath at the base of the column on the feast day of the Immaculate Conception, December 8; they asked for Mary’s help in watching over them and keeping them safe in their work. Beginning in 1956, a delegation from the Vatican came to this ceremony, and Pope John XXIII himself came in 1958, marking an annual tradition of the Pope joining the firemen at this ceremony. Using a fire truck, the firemen place a wreath of flowers on the right arm of Mary and say, “flammas domamus, donamus corda." (9)

(1) The Immaculate Conception of Mary is sometimes confused with the Virgin Birth of Jesus; the Virgin Birth is the designation that, “Jesus was born without the agency of a human father, being conceived by the Holy Spirit in the womb of the Virgin Mary and subsequently born while Mary was yet a virgin” (The International Standard Bible Encyclopedia, Volume 4, Geoffrey W. Bromiley, p. 990). The Immaculate Conception has nothing to do with Jesus’s conception in Mary’s womb, but rather Mary’s conception in her mother’s womb.

(2) This embassy, established in the 17th century, gave the name to the larger square, Piazza di Spagna.

(3) Blessed Mary of the Immaculate Conception.

(5) The most high will sanctify his tabernacle.

(6) Behold, the Virgin will conceive.

(7) This door will remain closed forever.

(8) I shall place enmity between you and the woman.