On Grief, Ruins, and the Theater of Marcellus 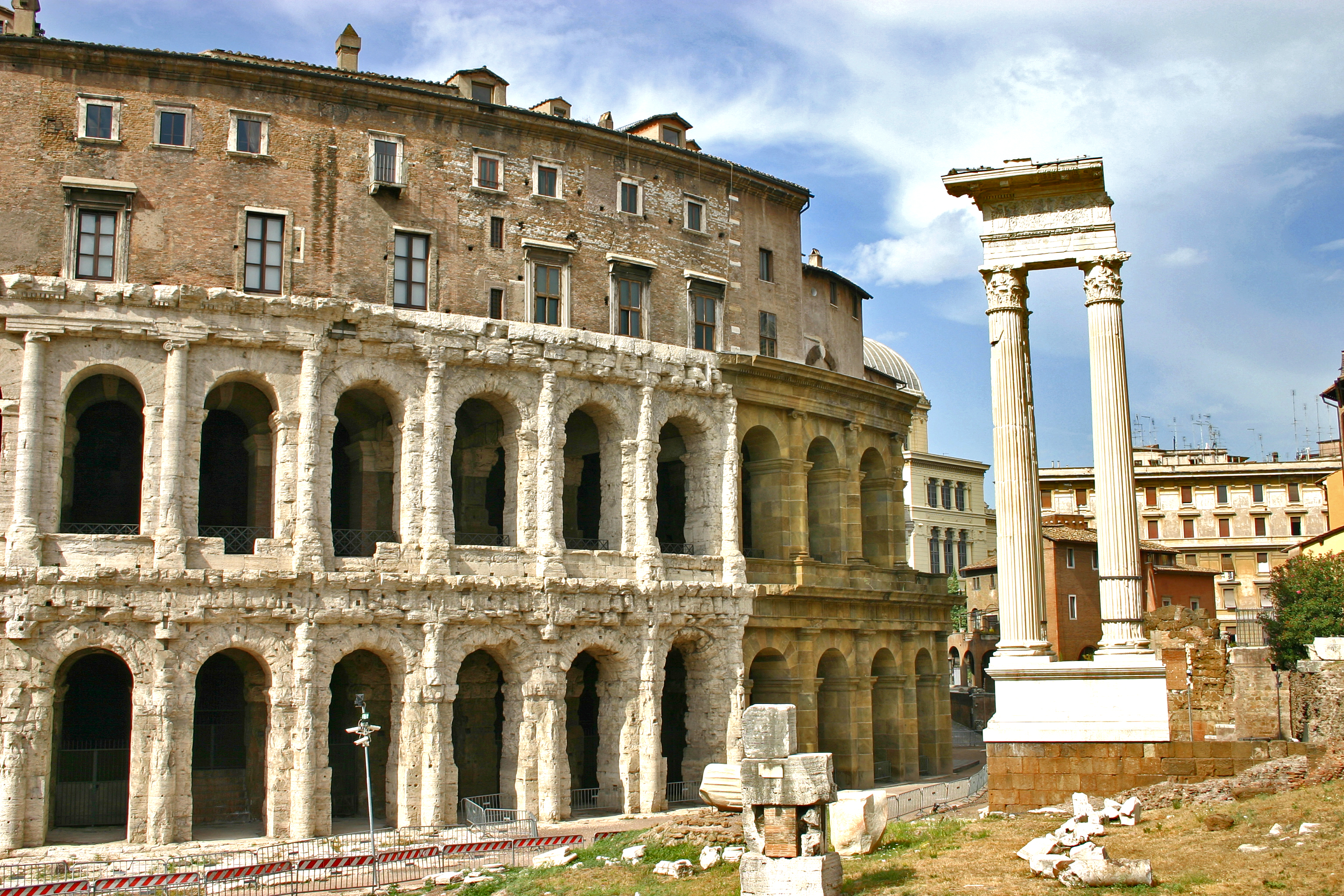 On the southwestern flank of the Capitoline Hill between its museum and the Jewish Ghetto stand the remains of a large structure that has a series of open arcades, Doric and Ionic columns, and a plain frieze. But a closer look reveals a series of residences on the top. What is this strange construction? A lost tourist might be understandably confused, mistaking it for its more famous, similar-looking sibling up the Viale dei Fori Imperiali, the Colosseum. This strong resemblance is no accident, as this structure served as the model for the Colosseum, though predating it by nearly a century. Built in honor of a young man whose potential was never realized, this is the Theater of Marcellus: an excellent exemplum of the complicated mishmash of history that the city itself represents.

The emperor Augustus dedicated the theater in 13 BC to the memory of his nephew, son-in-law, and presumed successor1, Marcus Claudius Marcellus.2 Marcellus had died under uncertain circumstances ten years earlier at the age of 19 after serving in Spain for the Roman army with Augustus and Tiberius. His death, coming on the heels of outsize expectations both within and outside the imperial family, shook the small ruling circle of elite Romans; its symbolism is a testament to the cruel vicissitudes of destiny famously inspired Vergil in Book VI of the Aeneid:

The repeated direct address in this section demonstrates the intensity of emotion in the speech, as well as the use of the despondent exclamation and the wistful counterfactuals. Marcellus’s perceived positioning as crucial for the potential of Roman success is underscored by the reference to the gods and the hyperbole of Rome’s triumph with him at the helm of the empire. According to Aelius Donatus, this event and the resulting lines were reportedly so affecting that when Vergil recited them to Augustus and Marcellus’s mother Octavia, she fainted: “quae cum recitationi interesset, ad illos de filio suo versus, "tu Marcellus eris", defecisse fertur atque aegre focilata.”4 The emphasis on the identity of her son demonstrates the importance of Marcellus’s death. The endurance of the theater among the monuments of Rome, despite the transformations the city would undergo, echoes the significance and permanence of this death for the people of the 1st century BC.

As the largest and most important theater in Rome, its past uses and forms mirror the variety of changes that the Eternal City endured over time. It was originally conceived of by Julius Caesar, who removed the Temple of Pietas as well as other shrines and private houses to make room for it, although its completion is credited to Augustus. The young leader’s namesake construction was so grandiose and so advanced that part of the Ludi Saeculares was able to be held inside it four years before its completion. It could seat somewhere between 11,000 and 20,000 spectators at capacity. Even in antiquity, the theater represented the mix of cultures that Roman imperialism allowed; it was built mostly of tufa, travertine, and opus reticulatum, as well as what is possibly the earliest example of fired brick at Rome, which was at that time a new import from the Greek world. Its use as a site for entertainment in the form of drama and poetry is attested by Martial,5 Propertius,6 and other writers. As the priorities of Rome changed, some of its travertine blocks were used in the restoration of the Ponte Cestio in 370 AD. The theater did not fall entirely into disrepair, though, as the prefect Petronius Maximus set up a statuary inside it in 421 AD; by 998 AD, inscriptions attest that while it still bore the Marcellus name, it was used then as the site of obscene spectacles. In the tumultuous 12th century, the Fabii family turned it into a fortress, and in the 14th the wealthy Savelli family commissioned the architect Baldassare Peruzzi to build a palazzo, removing the Corinthian columns on the top arcade in the process. By the time it passed to the Orsini family in the 18th century, their renovations were responsible for its present appearance, with multiple apartments above the ancient ruins. Today, those apartments are valued at $26 million – with virtual tours available online, naturally – and the city holds concerts of classical music on its lawn in the summer. The intricate changes of the building’s function and ownership reflect its shifting architecture and aesthetic.

The central figure of a young man whose possibility was cut short appears again in the Aeneid, in Book X, with the contrasting characters of Pallas and Lausus: “nec multum discrepat aetas/egregii forma, sed quis Fortuna negarat.”7 Again there is a lament for the premature loss of men who could have effected great things, and the cruel vicissitudes of Fate which deny them. But Vergil portrays these deaths as necessary for the advancing motion of destiny; the sorrow of their loss is permanent, even as history moves forward without them. So too the mournful remains of a similar young man’s theater stand as the chaos of time swirls past it. Ultimately, the example of Marcellus and his theater shows us that history is an ever-changing web of what-ifs and so-thens -- and architecture, its lasting conclamatio.

2. Not to be confused with the first Marcus Claudius Marcellus, consul of 222 BC.

3. “O son, do not ask about the great grief of your people. The Roman race would seem too powerful to you, gods, if these gifts had been theirs. Alas, wretched boy, if you could break any harsh fates, you will be Marcellus,” Verg. Aen.VI. 882-3.

4. “When [Octavia] attended the recitation, at the verses about her son – ‘you will be Marcellus’ – she is said to have fainted and was revived with difficulty,” Ael. Don. Vitae Vergili 32.