Who Had the Last Laugh? The Deaths of Saint Lucy and Diocletian 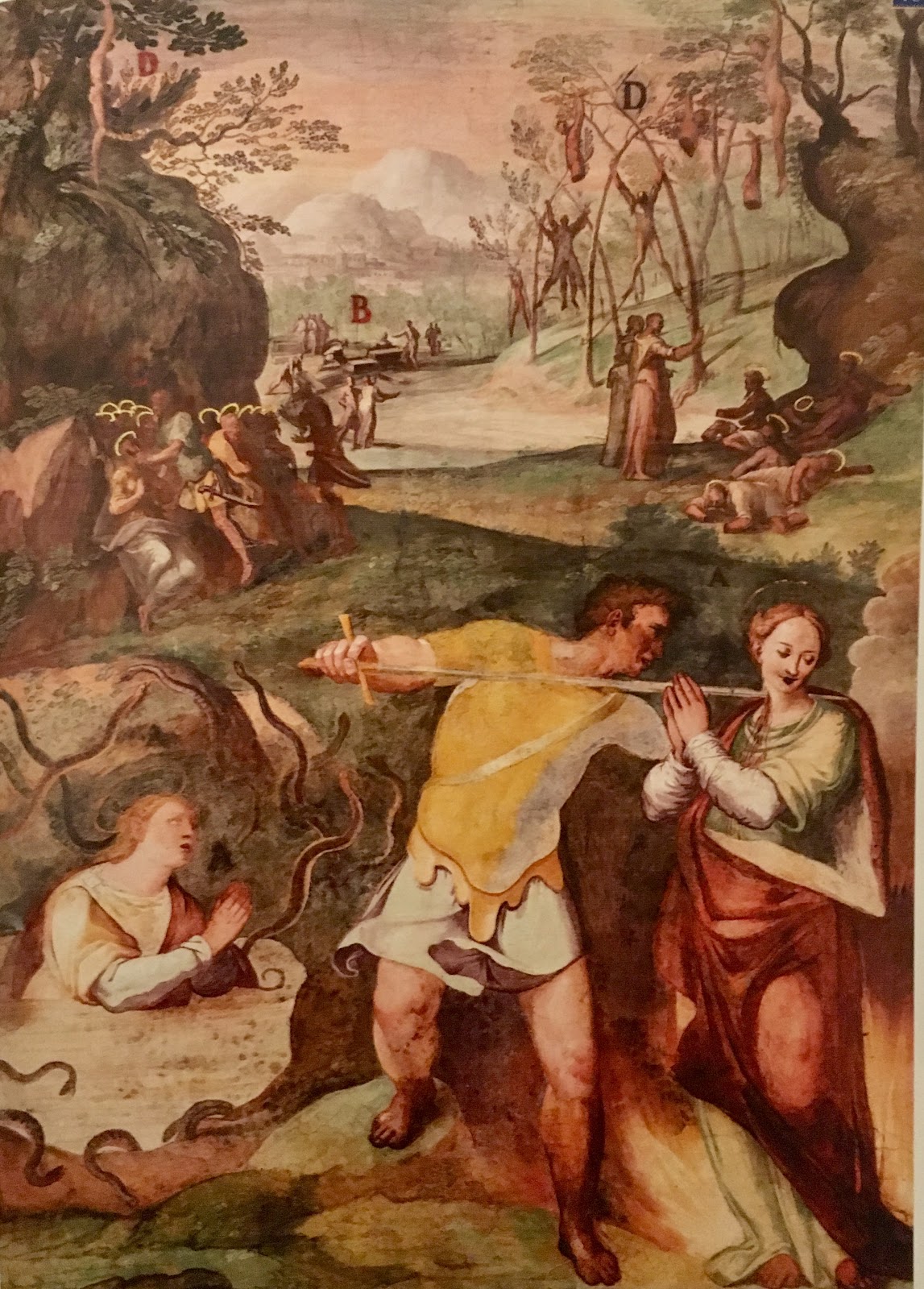 Nailed to a cross, hurled into the sea, devoured by wild animals, hacked to pieces, crushed under the weight of marble, burned, beheaded, and buried alive: when it came to killing Christians, the Roman prosecutors exhausted their options. Adorning the circular walls of the Basilica of Saint Stephen are thirty four graphic scenes of martyrdom commissioned by Pope Gregory XIII in 1583 and painted by Niccolo Circigani and Antonio Tempesta.

The Basilica di Stefano Rotondo is unique among churches in Rome. It does not impress the visitor with elegantly carved statues or dazzle with walls decked out in gold. Rather, light floods in through a plain, white, circular opening in the center while the frescoes on the outer wall, illuminated by a few unboarded windows, appear all the more bleak. The contrast seems to suggest that while the deaths of the martyrs were indeed gruesome, they ultimately went with peace into the light. For on the face of each martyr, despite enduring unthinkable torture, is an expression of absolute calm.

Underneath each frescoe are two plaques, one in Latin, the other in Italian, that caption the scene. Atop each plaque is the name of the emperor under whose rule the martyrs sacrificed their life. As you slowly make your way around the circle, neck craned upward, mind reeling with a likely combination of pensive reflection and delighted horror, you take in the looming presence these emperors: first Nero, then Domitian; Trajan and Hadrian follow; Antoninus Pius and Marcus Aurelius share a space atop their plaques, as do Septimius Severus and Caracalla, and Domitian and Maximian. The final emperor represented is Julius the Apostate, who, as the last pagan ruler of the empire, acquired the nickname from his rejection of Christianity fifty years after Constantine passed the Edict of Milan. In other circumstances, the portraits of these emperors look dramatically different: noble busts, towering monuments, proud accomplishments etched into coins; but here, the emperors are defined solely by the varieties of torture they inflicted.

More than halfway around the circle of martyrs is one scene in which a man slides a long, thin sword through a woman’s throat as she happily looks downward, hands in prayer. She is Saint Lucy, patron of blindness and, naturally, of sore throats. 1 Iacobus de Voragine, the 12th century archbishop of Genoa, recorded her legend in his popular medieval collection of saints’ lives entitled Legenda Aurea, or the Golden Legend. Lucy had cured her mother’s chronic illness by praying to Saint Agatha and thereafter determined to give her dowry to the poor and dedicate her life to God. Her betrothed, however, complained of her faith to Paschasius, a judge during the reign of Diocletian, and he ordered her death. The following excerpt from the Legenda Aurea describes Saint Lucy’s death after the judge attempted to kill her first by throwing her to the brothels (she became too heavy to move) and then by fire (the flames would not burn her):

This scene is without a doubt a “drop-the-mic” moment of the 4th century AD. With blood gushing from her throat, Saint Lucy casually reminds the crowd of onlookers that Constantine had instituted a damnatia memoriae against Maximian, one of Diocletian’s co-emperors, and that Diocletian himself was withering away in in seclusion.3 It should be mentioned that immediately after her murder, a group of Roman sergeants came to remove the judge Paschasius from the scene and behead him for extortion. Saint Lucy certainly went out in style. Now let us turn to a passage regarding the death of Diocletian. Lactantius was a teacher of rhetoric in North Africa, to whom Diocletian offered a job. When Lactantius later converted to Christianity, he fled his post as professor in Nicomedia in order to escape prosecution and kept his head down until Constantine I became his new patron. In his work, De Mortibus Persecutorum, or On the Deaths of the Prosecutors, he describes the downfalls of the the major prosecutors of Christians before and during his lifetime. On Diocletian’s death, he writes:

If you enjoy a good underdog story, the contrast in death scenes between these two very opposite figures, the ruthless ruler and the victimized virgin, could not be more satisfying. Saint Lucy enjoys divinely inspired control over her body: neither man nor flame can harm her and she is even able to delay death until a priest can come for her body. Diocletian on the other hand, who abdicated his title due to sickness, lacks control over his body in Lactantius’ description. While Saint Lucy dies with steadfast resolution, Diocletian wallows in tormented thoughts, restless and unable to nourish himself. It is impossible to know for sure how Diocletian felt in his dying days. Did he really commit suicide, plagued by illness and the knowledge of his legacy slipping from under his feet? Or did he find some version of acceptance in his final years of retirement, planting cabbages and looking over his palace gardens? It depends on whom you ask. In the Basilica di Stefano Rotondo at least, the thirty four horrifically brutal frescoes remind the onlooker that though the emperors sought doggedly to eradicate their religion, the martyrs died not in vain.5

1) There is a lot going on in this particular fresco. In the lower left hand corner (letter A) we have Saint Euphemia. Before she was ultimately given over to lions, she was thrown into a pool of venomous snakes. When she prayed, the snakes lifted her on their backs to prevent her drowning. In this version, however, they seem to be fleeing the pool. Mid-level on the left (letter C) an executioner gouges out the right eyes of the victims. Beyond them in the distance (letter B) Christians are being enclosed in lead boxes and thrown into the river. In the back right hand corner (letter D) they are hung from trees.

2) Lucy said, “I have been granted a respite from my martyrdom so that I may remove the fear of suffering from those who believe and remove the voice of insult from those who do not”. But then those colleagues of Paschasius, who saw that he was distressed, plunged a sword into her throat. She, by no means losing her voice, said, “I announce to you that the peace of the church has been returned now that Maximian is dead and since the reign of Diocletian has been banished.”

3) Maximian hanged himself in 310 AD after Constantine instituted the damnatio memoriae against him. St. Lucy is said to have died in 304 AD. It is possible that Iacobus de Voragine had Saint Lucy make this speech for effect or that he had a different source of information regarding the date of her death.

4) At this time, by the order of Constantine, the statues of old Maximian were being torn down and images everywhere were being stripped away; and because the two old men were generally depicted together, images of the both of them were removed. And so Diocletian lived to see what no other emperor had experienced. Afflicted by a two-fold sickness, he resolved to die. He tossed and turned, seething in his mind, unable to sleep or eat. He sighed, he groaned, he sobbed, he suffered a constant restlessness of his body, at one moment on the couch, then on the ground. And so the most prosperous emperor of twenty years, now cast down by God to a insignificant life and trampled by injuries and forced into a hatred of life, finally with hunger and mental distress, ended his life.

5) On our first visit to Stefano Rotondo, the other Fellows and I snuck in for a quick peek before a wedding ceremony commenced. On my third visit to the church, I plucked up the courage to ask the attendant in my still-developing Italian how many wedding ceremonies the church holds in a given year. The answer: give or take, about a hundred.