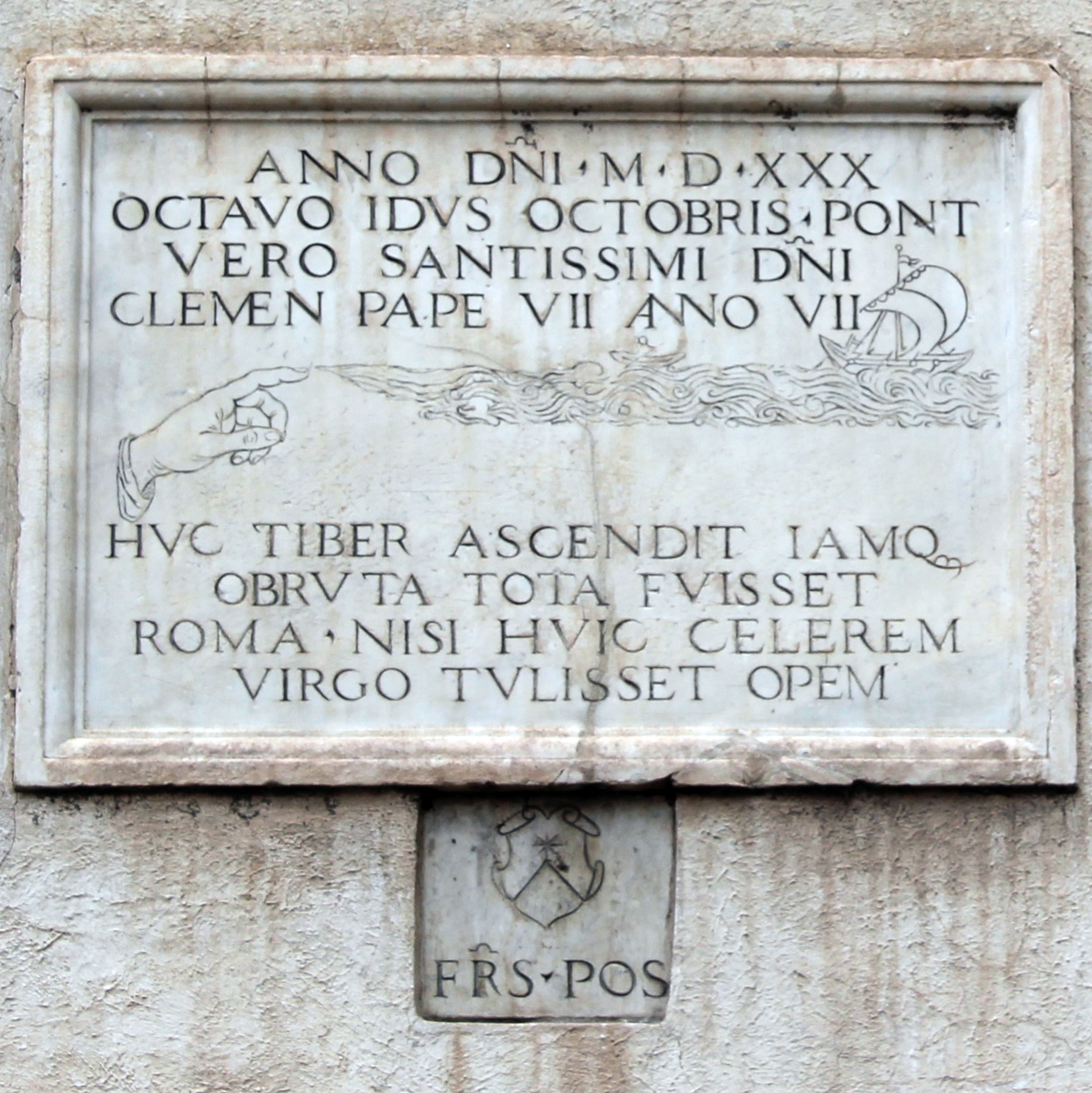 In the Piazza della Minerva, a small square just next to the Pantheon, the first thing one might notice is a small but fascinating obelisk on top of an elephant bearing a hieroglyph-covered obelisk on his back. (Ignore him for now--but when you’re done here, if you find that you’re still curious, check out this blog post). Beside him is a church: Santa Maria sopra Minerva, which gets its name from the Roman temple whose ruins composed its foundations in the fourteenth century. Walk a bit closer—closer—no, no. Don’t go inside…well, do, it’s really quite a lovely church, but I need you to do something else first. Thanks.

Look over at the wall on the right side of the entrance, and you’ll see a grouping of stone plaques embedded into the wall. These plaques are only slightly more recent than the church itself, each dated sometime between the mid-fifteenth century and near the end of the sixteenth, and they tell us how high the flood waters of the Tiber reached in that particular area.

There are five of these plaques on this particular church alone, though they are far from the only ones decorating the sides of important buildings in Rome. They are not even the only ones recording the particular floods listed; whenever the Tiber rose high enough, it could affect large portions of the city. These markers were placed in common locations all over Rome in order to memorialize the floods, which could cause a huge amount of damage in a short period of time. This is especially true for places within the area once known as the Campus Martius. This piazza and the neighboring one in front of the Pantheon, Piazza Navona, are located in one of the lowest spots in Rome, which means that the water levels in this area could reach surprising heights—over six feet according to one plaque!

Of the five inscriptions on the side of Santa Maria sopra Minerva, I find one in particular very interesting, though not because it is unique. In fact, it demonstrates the most common form for these plaques to take. It reads:

The first half of this plaque is actually referring to the date on which the flood took place: octavo idus octobris (eight days before the ides of October). This, as many of you know, is how Romans looked at the calendar--the Ides of March is not a concept peculiar to the story of Julius Caesar; it is merely the ancient Roman way of referring to the 15th or 13th of the month. What’s really interesting here about this dating method is that this plaque was placed here over fifteen hundred years after Caesar’s own unfortunate demise on the Ides.

We can be sure of the distance between the time periods because the plaque informs us with two different ways of marking the year. The first is actually using Roman numerals, but the second refers to the papacy. It says: pont vero santissimi dni clemen pape vii anno vii, which records that it was during the papacy of Clement VII, specifically his seventh year as pope. The oldest one on this particular church dates to 1422, but it is this one from 1530 that has the most decoration.

The second paragraph of this inscription thanks the Virgin Mary for saving them from the flood. It says that: “huc Tiber ascendit iamq obruta tota fuisset Roma nisi huic celerem virgo tulisset opem.” The location of the plaque combined with the inscription implies that these plaques were not only a memorial, but that many of them also functioned as an homage to the assistance granted by God during these disasters. Many others lack this piece of devotion, instead recording only the height of the flooding and the year.

Between the two four-line groupings is a simplistic piece of artwork: a hand with a pointing finger, from which the water of the Tiber streams forth, holding up a small boat. It is this line of water which indicates the actual level of the flooding, and it is a fairly common image to find on flood plaques over the city.

While this manicula does have an obvious practical function, it may also have a symbolic one as well. Romans very often anthropomorphized the river around which they built their city. It features in poetry largely as a protector and a friend to Rome, as in book eight of the Aeneid, in which the river himself appears before Aeneas in lines 31-35.

Here, the Tiber (often called Tiberinus by the Romans) appears before Aeneas as a powerful, but kindly, old man with a grey cloak and hair tangled and adorned with reeds. In the next few verses, he tells Aeneas that he will shelter great cities—cities like Rome. Despite the massive destruction caused by the floods, and commemorated by their markers, Romans continued to think of the Tiber as a refuge more than a danger; they continued to build along the river into the Medieval period. There are several statues of this grand, calm, sober Tiber. One of the most famous ancient examples is located in the Capitoline Museum, though if you go visit the intersection of Via delle Quattro Fontane and Via del Quirinale, you will encounter a more modern example among a collection of four statues commissioned by Pope Sixtus V. Each corner or this intersection displays an anthropomorphized river, and one of them we can identify for certain: an old bearded man reclining on his side in front of a large oak tree, accompanied by a familiar wolf. These statues were installed in the late 16th century, only a few decades after the flood mentioned in the plaque above. The memory of the destruction that had come from the stony, inscribed hand outside of Santa Maria Sopra Minerva has seemingly been washed away.