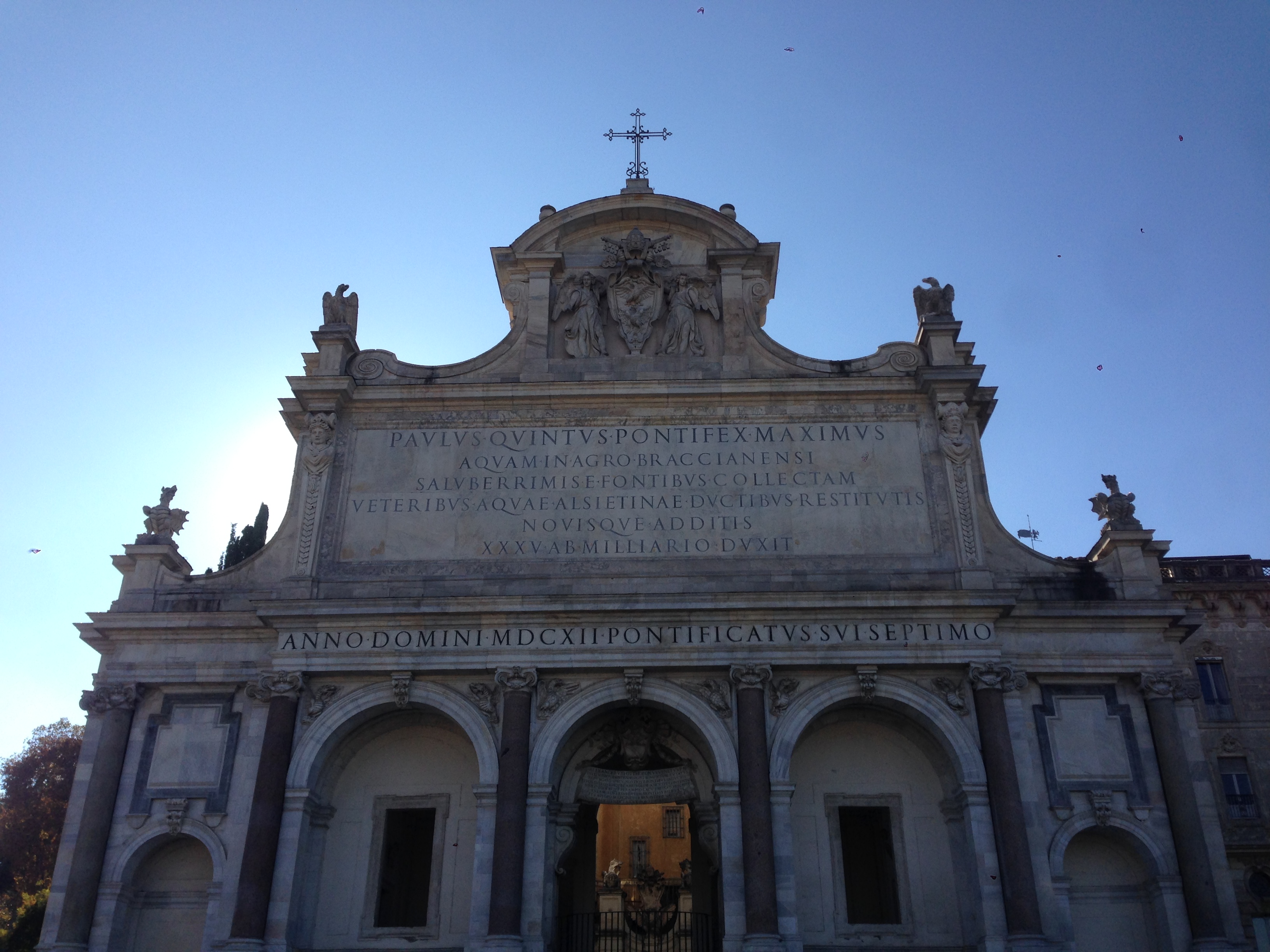 One of Rome’s most beautiful (and least crowded!) fountains, the Fontana dell’Acqua Paola, sits atop the Gianicolo, a hill west of the historic center of Rome. The fountain’s name, literally “The Fountain of the Paulian Water” speaks of its creator: Pope Paul V.

The fountain is simple, yet majestic: three large arches form the center of the fountain, with a smaller arch flanking each side. Water flows beneath each of the large arches into small basins, which in turn flow into a large semicircular pool that fronts the entire fountain. Rather than featuring a particular program of sculpture, the fountain uses very little ornamentation in order to allow the main focus of the fountain to be the flowing water itself. The simplicity of the fountain’s decoration also allows for greater attention to be paid to the massive inscriptions atop it.

There are a few interesting things to note in this inscription. First, the emphasis on the fact that the sources are saluberrimis. This word has particular meaning in the context of Paul V’s pontificate. The inhabitants of the Gianicolo, before the construction of this fountain, had to get their water from brackish springs or even from the very polluted Tiber river; Paul V’s emphasis that this water was most healthful was an attempt to mollify the Romans who had grown tired of drinking dirty water.

The second point of interest is the inscription’s assertion that the fountain was built from reconstructed ducts of the Aqua Alsietina. The Aqua Alsietina was an ancient aqueduct constructed in the late 1st century BCE that fed into this part of the Gianicolo:

In reality, though, the Fontana dell’Acqua Paola was built from reconstructed parts of the Aqua Traiana, not the Aqua Alsietina. The inscription got the name wrong! I find this a particularly funny example of a mistake written in stone. It’s possible that the fountain’s constructors honestly thought they had reconstructed the Aqua Alsietina, but also seems plausible that they wanted the alliteration of the two A’s in the inscription, or even that the longer Alsietinae put more emphasis on this long, central line of the inscription than Traianae could have done.

The Aqua Traiana was built under the watch of the emperor Trajan to serve the part of Rome that was the industrial quarter. Trajan’s designers were likely influenced by Frontinus, the authoritative source on aqueducts; Frontinus lived from 40 - 103 CE, so his work would have been just finished at the time that construction on the aqueduct was starting. It is unclear exactly why Trajan wanted to build an aqueduct in this part of Rome, given that the Aqua Alsietina already provided water nearby. This part of Rome experienced great growth in the 1st and early 2nd centuries CE, so the most likely answer is that Trajan simply wanted to better serve this newly increased population.

The inauguration of the Aqua Traiana was recorded in the Fasti Ostienses as having occurred on 24 June 109 CE. The aqueduct was described as tota urbe salientem, leaping out into the whole city. Though the exact distribution of water from the Aqua Traiana is unknown, this description suggests that it the water was widely dispersed throughout the city. The sources of the Aqua Traiana were numerous: Alberto Cassio, in his 1746 archaeological survey, Corso dell’Aquae Antiche, lists the many sources of the aqueduct. It began to collect water from the northern and eastern sides of Lago Bracciano, a large lake northwest of Rome; from there, it continued south towards Rome, collecting water from various sources along the way. The Aqua Traiana then entered Rome from the southwest, ending on the Gianicolo:

Paul V’s reconstruction of the Aqua Traiana was not complete; he did not manage to gather all ancient sources of water for the aqueduct. Some of the original sources had been diverted towards the city of Bracciano. Giovanni Fontana (apt name, no?) was responsible for the engineering of the project. He oversaw the construction and repairs that brought together again the sources of the Aqua Traiana.

The construction carried out under Paul V produced a fountain that is similar to the one that stands today, though alterations have since been made to this first design. Paul V’s version had five small basins placed beneath each arch of the fountain, and lacked the large semicircular basin in front of the whole structure; this original design was produced by Flaminio Ponzio, one of Paul V’s favorite architects. Much of the marble for the fountain was sourced from the Forum of Nerva, which Paul V had dismantled in 1606. (The rest of the marble from the Forum of Nerva was used in constructing the Borghese chapel within the Basilica of Santa Maria Maggiore.)

The fountain’s adjustments and enlargements were carried out towards the end of the 17th century by Pope Alexander VIII. In 1690, Alexander VIII hired Carlo Fontana (nephew to Giovanni Fontana) to enlarge the basin in front of the fountain, so that water from each arch would flow together in front of the structure. An inscription commemorates this contribution:

Alexander VIII gives due credit to Paul V and describes his own additions. It is interesting that at this point, Alexander VIII is only interested in connecting himself with the previous constructor of the monument and not with any ancient story or sponsor of a previous monument on this site.

The Fontana dell’Acqua Paola represents the tendency of many leaders in Rome, particularly popes, to associate themselves with ancient monuments while attempting to restore them to their former glory. Despite the fact that he got the name wrong, Paul V was clearly connecting himself to ancient construction by including the specific name of the former aqueduct in the inscription of his new fountain. But it wasn’t just popes who connected themselves to ancient Rome: Mussolini rapidly excavated the forums behind the Capitoline Hill in the late 1920s and early 1930s and laid out the Via dei Fori Imperiali to reveal all that ancient Rome had to offer, and to associate himself with the revitalization of these ancient spaces.

This phenomenon of restoration-for-notability has had an uptick in interest recently: Italian companies have taken to restoring Roman monuments. Tod’s is sponsoring the restoration of the Colosseum, Bulgari, the restoration of the Spanish Steps, while the Fendi-sponsored cleaning of the Trevi Fountain was just completed. It seems that the allure of connection to ancient Rome remains as strong as it was in the Renaissance; ancient Rome still stands as an emblem of success, knowledge, and elegance which modern Romans hope might rub off on them with enough association.

2. Paul V, as Pope, after the old pipes and ducts of the ‘Aqua Alsietina’ were restored and new pipes were added, brought [here], from 35 miles away, the water collected from the most healthful sources in the area around Lake Bracciano.

3. Alexander VIII of the Ottoboni family of Venice, when he was Pope, having protected the good deed of the most wise Pope Paul V, and once the pipes were cleaned again and new sources were led in, received the streams--once narrowly held each within its own basin--in one same wide pool. He constructed this space against the slipping of the hill, and he finished and decorated it with a fronting of marble. In the year of salvation 1690, the second year of his pontificate.