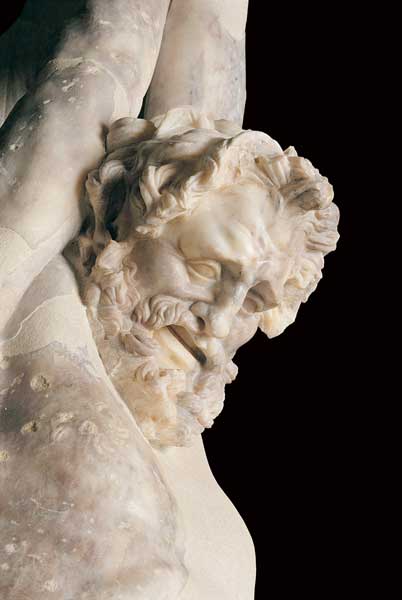 The woeful story of the satyr Marsyas, memorably captured in ancient literary sources, has served for centuries as a lightning rod for interpretation. In it, Marsyas challenges the god Apollo to a musical contest. The prize for winning this contest allowed the winner to do whatever he liked with the loser. Perhaps unsurprisingly, Marsyas lost; Apollo hung the satyr from a pine tree and flayed him alive. The ultimate symbol of human hubris, Marsyas has long since represented the audacity of man and humanity’s largely disastrous relationship with the gods. But in fact, some ancient sources present Marsyas’ flayed body in an entirely different light: as an image not of recklessness, but brave defiance.

Ovid’s Metamorphoses is the ancient source from which most modern readers draw their understanding of the Marsyas story. Ovid’s focus on the tears of Marsyas’ friends at his death, instead of the tragic narrative of the satyr’s actual demise, seems to encourage an interpretation of shame at the emotional cost of his hubris:

Hyginus, on the other hand, focuses more on the contest narrative and the bodily consequences of Marsyas’ loss. Before describing the satyr’s bloody punishment, Hyginus’ passage2 tells us that Apollo won the contest not because of superior skill, but instead by changing the rules of the game in a show of underhanded, divine trickery.

Hyginus’ focus on the corporeal punishment, combined with the arbitrary and unfair nature of Apollo’s victory, creates a more sympathetic portrait of Marsyas. This difference between the two excerpts may have something to do with the writers’ biographies. Although they were roughly contemporaneous, Hyginus was a freedman where Ovid came from wealthier stock. With this in mind, it makes sense that the former slave might paint Apollo not as the rightful champion with greater skill, but as a powerful oppressor bent on winning at any cost. Marsyas is much more the tragic victim here.

No physical source conforms with this alternate interpretation more closely than the statue of Marsyas which stands in the Horti Maecenatis Halls of the Capitoline Museum in Rome. A copy dating from the early days of the Principate of a 2nd century BC Greek original, it was found in 1876 on the Esquiline near the Auditorium Maecenatis.4 Even in comparison to other statues of the same subject, such as the one in the Centrale Montemartini presenting the silens just before his flaying,5 this statue centers upon the pathos of the figure.

Rather than depict Marsyas awaiting punishment, the Horti Maecenas statue instead chooses to focus on its physical impact and, as a result, Marsyas’ mortality. The sculpture’s face is contorted in clear agony. His head hangs limply with his chin on his chest. The restoration of the hands and lower legs draws full attention to the excruciating position in which Marsyas is bound, and the pose emphasizes the way that his hips, ribs, and shoulders seemingly jut out after his sentence. The overall picture is one of a body which has reached its capacity for pain. But by far the most striking aspect of the sculpture – and the one which most clearly supports the idea of Marsyas as a symbol of defiance used in republican populist movements – is the graphic, ghoulish purple intended to represent his blood. A dramatic rendering of the painful consequences of his actions, the immediacy of the color implies the opened veins of the figure.

Instead of the arrogance seen in other interpretations of the story, this portrayal intensifies the viewer’s relationship to Marsyas, encouraging the observer to relate to him. The purple calling to mind an intense amount of blood transforms Marsyas into a tragic figure, suggesting that even if one accepts his temerity as worthy of divine retribution, certainly at this point the punishment vastly outweighs the crime. By emphasizing Marsyas’ raw, bleeding, and exhausted body, the statue defiantly declares itself to be on his side, and, implicitly, not on that of the powerful. The in-your-face quality of the sculpture’s body underlines Marsyas’ humanity, however flawed and rebellious.

The use of Marsyas as a positive symbol in the mid-Republic and early Empire seems more reasonable after taking into account this particular reading of the statue. Various sources in antiquity depict Marsyas as an astute leader with politically charged motivations. A tradition associating him with wisdom harkens back to a reference in Plato’s Symposium,6 and a statue of Marsyas as an old satyr stood by the comitia near the Roman Forum for almost 300 years. This statue was apparently regarded as an emblem of free speech. The figure was also quite clearly connected with plebeian and non-cosmopolitan interests, as both the prominent plebeian gens of the Marcii and the native Italian people of the Marsi claimed him as an ancestor.7 With these associations, Marsyas further came to be considered a figurehead for political autonomy; during the Social War, colonies, including Paestum and Alba Fucens, set up statues of the satyr as declarations of their own civic status.8 Later, under the Principate, Augustus’s daughter Julia took symbolic aim at her father, whose propaganda styled him as the torturer Apollo, by crowning a statue of Marsyas and holding nighttime meetings there.9 Thus, an undercurrent of political rebellion ran through the ancient world’s understanding of this figure.

The story of Marsyas is complicated by its alternate readings of the satyr’s motivations. Is he a big-headed musician who dared to challenge a god in his hubris? Or is he a tragic figure, fraught with political courage, punished for standing up to divine tyranny? The question was clearly not settled in the ancient world. But the loaded history of Marsyas’ use as a political emblem and the Horti Maecenatis sculpture tell us that nothing is what it seems, least of all this narrative of humanity and virtue, of domination and defiance.

(1) “And so the rural people, the deities of the forests, fauns And satyr brothers and then also dear Olympus And the nymphs wept, and shepherds roaming the hills Mourned as they tended woolly flocks. And the fertile, soaked land caught And the tears and drank it into its deepest veins …the swiftest-flowing river of Phrygia has the name, ‘Marsya’,” Ov. Met. 392-400.

(3) “And when Marsyas was departing as victor, Apollo turned his lyre over, and played the same song, which Marsyas couldn't do with his pipes. And so Apollo defeated Marsyas, bound him to a tree, and turned him over to a Scythian who stripped his skin off him limb by limb. He gave the rest of his body for burial to his pupil Olympus. From his blood the river Marsyas took its name.”

(9) Elaine Fantham, "Liberty and the People in Republican Rome," Transactions of the American Philological Association 135 (2005), p. 227.