The Story of Ponte Sant'Angelo 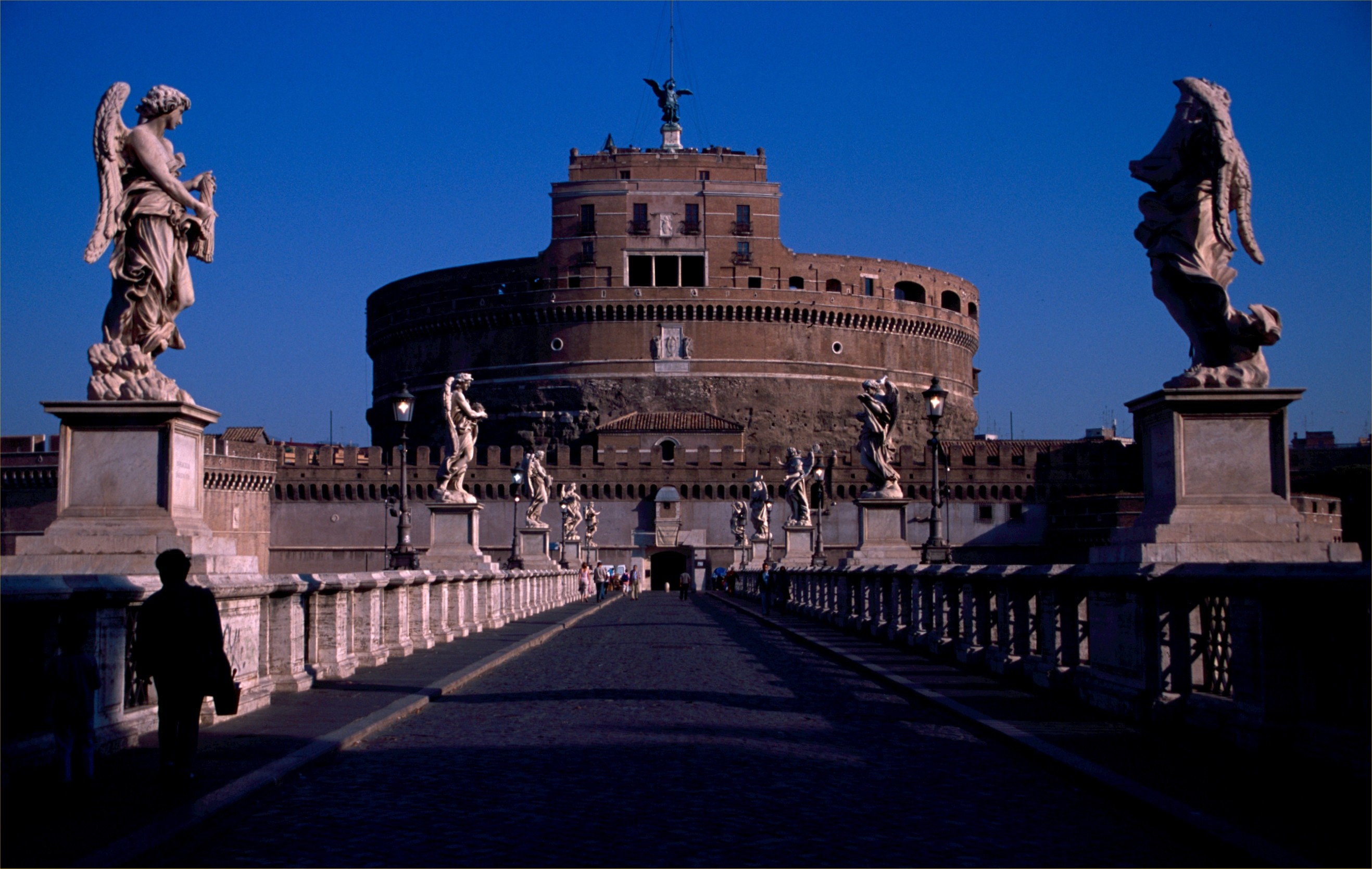 Ponte Sant’Angelo is arguably Rome’s most storied bridge—it has existed since the early 2nd century CE, though changes have been made since its initial construction.

The bridge was designed by Demetrianus, personal architect to the emperor Hadrian, and was completed in 134 CE. Contrary to popular belief, the bridge was actually created before Hadrian’s mausoleum; bricks stamped with the year 120 and 123 CE prove that the bridge predates what is now Castel Sant’Angelo. The bridge was likely used to transport materials from central Rome to the construction site across the river, a part of Rome that at that time was neither inhabited nor developed. The bridge was called the Pons Aelius, named for Hadrian, also known as Publius Aelius Hadrianus.

After the construction of the Basilica of St. Peter in the 4th century CE, the bridge became essential as a route from the center of Rome to the Basilica, thus its name, Pons Sancti Petri. The name ‘Sant’Angelo’ came two centuries later: in 590 CE, while taking part in a penitential procession at the castle (now a fortress used by popes), Pope Gregory I saw the Archangel Michael appear on top of the mausoleum. Pope Gregory I saw the angel sheath a bloody sword, and took it as a sign that the plague which had been ravaging Rome for years was finally over. In remembrance of this event, Pope Gregory I topped the mausoleum with the statue of an angel, and began to call the structure Castel Sant’Angelo. By association with the castle, the bridge began to be called Ponte Sant’Angelo. The name was solidified by the addition of the statues of angels in the 16th century.

Small changes were made to the bridge and its surroundings in the 15th and 16th centuries. The most monumental change to date was Pope Clement IX’s 1668 commission of Gian Lorenzo Bernini to replace the stucco angels with massive marble angels. Pope Clement IX wanted the approach from central Rome towards the Basilica of St. Peter to be more magnificent and more spiritual; he chose the drama of the passion as the subject matter for the angels, so that the bridge might become the iter dolorosum or via salvationis.

The angels tell the story of the Passion of Christ chronologically, beginning at the righthand side of the southern end of the bridge and zigzagging towards Castel Sant’Angelo; the inscription below each angel describes that moment in the Passion. The inscriptions paraphrase, in Latin, passages from the Bible in which the Passion is described; many of the quotations can also be found directly in the Vulgate Bible.

(My throne is upon the column)

(I am prepared for the scourge)

(In my pain, the thorn is fastened upon me)

(Look at the face of your Christ)

(For my clothing, they cast lots)

(They will look at me, whom they have pierced)

(Dominion rests on his shoulders)

(God reigned from the tree)

(They gave me vinegar to drink)

(You have pierced my heart)

Bernini created the theme and made sketches on paper for each of the ten angels, many of which are now lost. He allowed eight different sculptors the chance to each carve one angel, and left two for himself: the Angel with the Crown of Thorns and the Angel with the Superscription. Pope Clement IX liked these two statues so much that he kept them for himself, and had copies made to be installed on the bridge. The two original angels can be seen in the church of Sant’Andrea delle Fratte in Rome.

The pose of the Angel with the Crown of Thorns began as one very similar to the ancient statue known as the Belvedere Antinous.

Clay model for Angel with the Crown of Thorns by Bernini

Bernini was known to take elements from a classical figure and then adjust and shape them towards his own idea for the sculpture. The figure with the crown has his weight shifted to the right, with his right arm crossed over his torso to drawn attention towards the crown of thorns. The model shows Bernini’s intention that the angel delicately hold the crown, as evidenced by the separated fingers.

While the arm in this model is dynamic and creates movement in the figure, Bernini’s final statue does a much more masterful job at creating movement throughout the angel’s body: his weight rests on his left foot, with his right leg bent and twisting in a way that allows the fabric to billow around and through his legs. The figure’s right arm still crosses his body, but its separation from the body and the delicateness of the fingers emphasize the angel’s discomfort in carrying this crown of thorns. Bernini’s decision to have the angel turning his head away from the crown reinforces his pain, while also creating movement in a different direction from the angel’s torso and legs. The clay model shows Bernini’s initial intentions for the statue, but it is only in the finished model that we see the finesse and dynamism often associated with Bernini’s work.

Clay model for the Angel with the Scourge by Bernini

The model shows the angel shifting her weight towards her right, with her left leg exposed. She looks down, sorrowfully, at the scourge in her hands. The movement in the model flows effortlessly from her neck down through her legs towards her feet. The model is detailed, much more so than the model of the Angel with the Crown of Thorns; if it were not only eleven inches tall, it might adorn the bridge in its current form.

The finished statue retains this rightward shifting of weight, with the angel looking at the scourge; the final statue is very similar in structure to the clay model, yet I would argue that the clay model is much more powerful in its communication of movement and sorrow. The clay model maintains a level of elegance from head to toe, while the final statue feels more static, as the movement  in the legs does not continue upwards into the shoulders and neck of the angel. The position of the head, as well as the expression on the angel’s face, do not express the sorrow that the clay model does; the angel seems more disinterested than distressed. That the clay model and final statue are so similar, yet have such different emotional effects on the viewer, speaks to the mastery of Bernini in expressing emotion in sculpture.

Ponte Sant’Angelo is an excellent example of a site in Rome that has existed since antiquity, yet has not remained static. That its history involves one of the most famous sculptors of all time, Bernini, makes it all the more interesting--Ponte Sant’Angelo is a structure that demands attention and demands that its layers be peeled away to reveal the nuance of its history and impressive beauty.

Hibbert, Christopher. Rome: The Biography of a City.