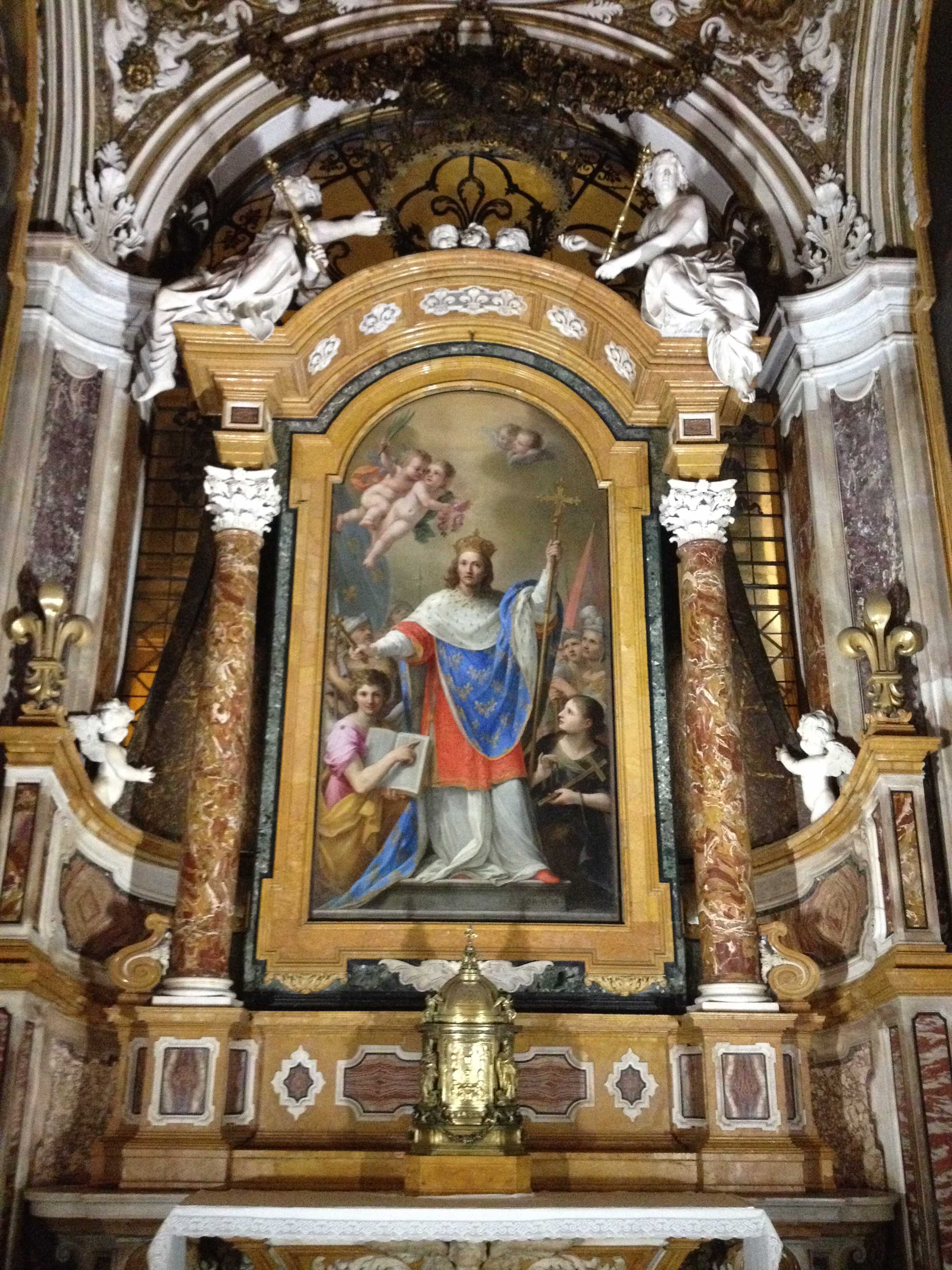 The church of San Luigi dei Francesi, located just a stone’s a throw from both Piazza Navona and the Pantheon, has served as the national French church in Rome since it was completed in 1589.  The church’s focus is, quite naturally, French Catholicism.  The namesake is St. Louis IX, a thirteenth-century king of France, who is featured prominently in several places in the church.  His sculpture stands on the façade, the vault over the nave depicts his entry into heaven, and the most richly decorated of the side chapels is his as well.

San Luigi’s celebration of Catholic France, however, goes well beyond this, one of her most favored sons.  Within, the chapel of St. Remy celebrates the conversion of Clovis, the king who made his Frankish kingdom the first Catholic nation.  One scene shows St. Remy baptizing Clovis, while another shows the king smashing pagan idols in favor of the cross and the bishop baptizing more Franks one after another.  These two walls together recall the words of Remy as he baptized the king, immortalized by Gregory of Tours in his History of the Franks: “Mitis depona colla, Sigamber; adora quod incendisti, incende quod adorasti.”1 This event, by which the kingdom of the Franks, the late antique precursor of modern France, became the first fully Catholic nation, is the reason that France became known as the “eldest daughter” of the Church.

While celebrating the history of French royalty’s service to Christianity, San Luigi also places this history in continuity with the present French monarchy.  One detail, easily overlooked today, particularly entreats visitors to remember the current “rex christianissimus,” as the kings of France were known for centuries.  Twin inscriptions, placed above the two holy water fonts at the entrance, so as to be readily visible to pilgrims as soon as they enter, offers encouragement to pray for the king of France: “Quicunq. orat pro rege Franciæ habet decem dies de indulgentia a Papa Innoc. IV.”2  This indulgence had been offered to the faithful for over 300 years by the time San Luigi was completed, dating back to the time of Pope Innocent IV (r. 1243-1254) and King Louis IX (r. 1226-1270), and this inscription reminds visitors to take advantage of it. 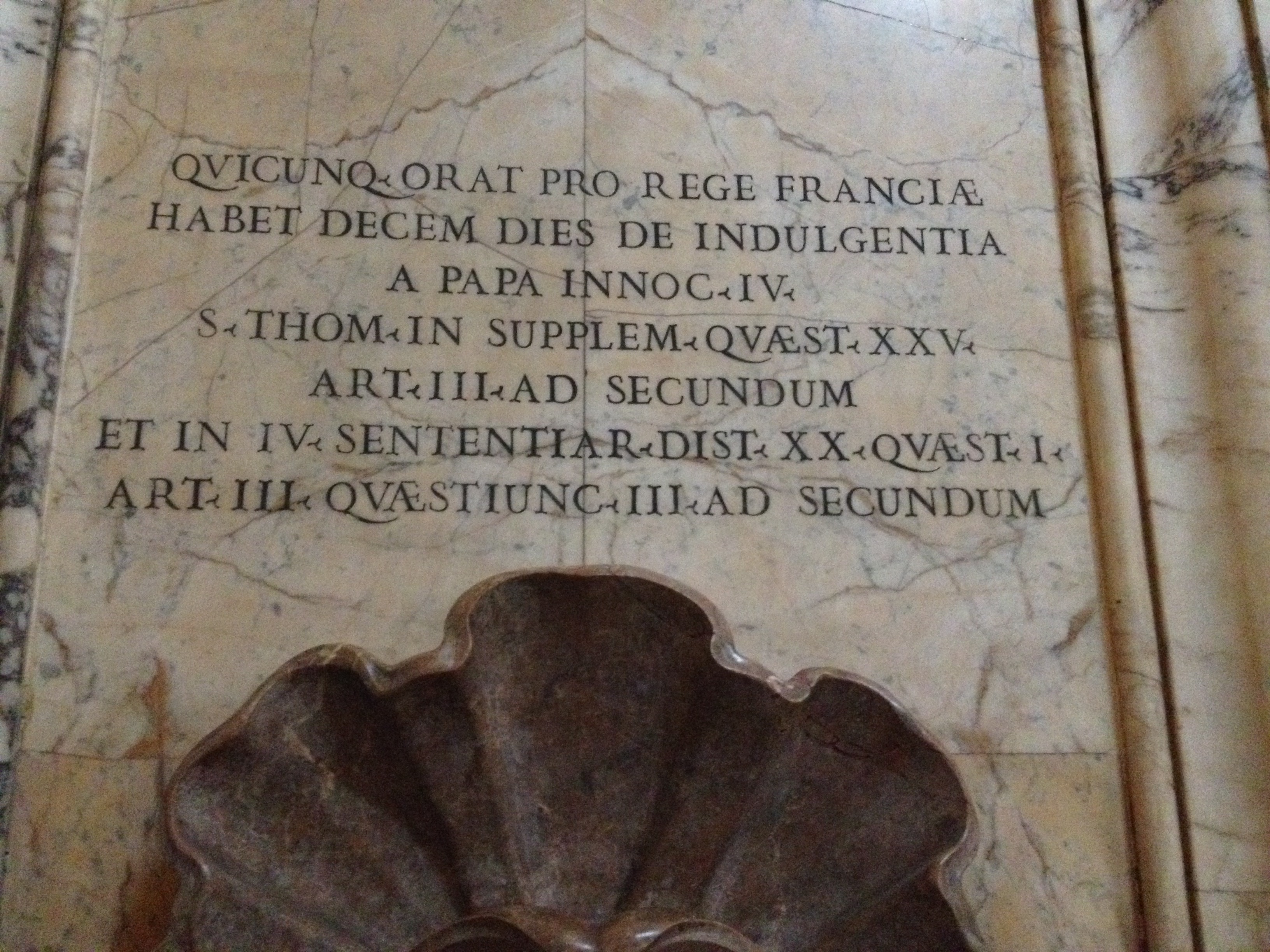 On its own, such an inscription would be fairly unremarkable: Rome’s churches are filled with explanations of indulgences, and engraved entreaties to pray for particular people are even more common.  What makes this particular inscription stand out is what follows its substantive message: “S. Thom. in Supplem. Quæst. XXV. Art. III. Ad Secundum et in IV. Sententiar. Dist. XX. Quæst. I. Art. III. Quæstiunc. III. Ad Secundum.”

To understand these lines, let us first expand the abbreviations: “Sanctus Thomas in Supplemento, Quæstione XXV, Articulo III, Ad Secundum et in IV Sententiarum Distinctione XX, Quæstione I, Articulo III, Quæstiuncula III, Ad Secundum.”  These two phrases direct the reader’s attention to two passages from the works of St. Thomas Aquinas.  The first comes from the Supplementum, a work compiled by Thomas’ students after his death in order to complete, with passages from Thomas’ earlier writings, the third part of his Summa Theoogiæ.  The second comes from his Scriptum Super Sententiis, a commentary on the twelfth-century work of theology by Peter Lombard, Libri Quattor Sententiarum.  Each of the cited passages includes the same text as the inscription (the passage in the Supplementum was taken directly from the Scriptum Super Sententiis): “Quicumque orat pro rege Franciae habet decem dies de indulgentia a Papa Innocentio IV.”  What we have here is a veritable footnote carved into marble!

Why would the maker of the inscription have gone to such great lengths as to give not one, but two source citations for a seemingly unremarkable message?  The obscurity of this detail in the church makes it difficult to say.  Perhaps the best explanation is the way these two Thomist works complement each other.  By citing the line’s appearance in the Supplementum, the designer of this inscription highlights the place of this text’s in Thomas’s greatest, most comprehensive, and most authoritative work of theology.  Then, by citing the passage from Scriptum Super Sententiis, he points out where the line appears in the body of works actually penned by Thomas himself.

Why footnote at all, though?  That is an even more difficult question, all the more so because we cannot be sure when the inscription was written.  The marble slabs on which it appears were erected between 1753 and 1759, but there is no telling whether these words were carved later: perhaps during the monarchy’s crisis in the French Revolution, perhaps in defiance after the king’s execution.  On the other hand, the inscriptions we see today could also reproduce identical ones that existed prior to the eighteenth-century decoration of the church.  If the use of the text dates back to the Counter-Reformation foundations of San Luigi, it could be a word in defense of indulgences like this one and in support of St. Thomas’s authority, both which were then being called into question.

Though anything more than speculation is impossible, perhaps the most plausible source of inspiration is the history of tension between the French monarchy and the papacy.  Despite the deep catholicity of the French royalty on display throughout the church, the king’s temporal power often clashed with the Roman pontiff’s spiritual authority.  Within the lifetime of the church of San Luigi dei Francesi, the ideology of Gallicanism (a name which itself from the name of Gaul), revived in the late seventeenth century, called into question the pope’s authority in the temporal sphere, particularly over the realm of France.  In 1682, when King Louis XIV moved in an assembly of French clergy to extend his rights over the churches of his kingdom, Pope Innocent XI immediately voided the assembly’s activity, and the king and his clergy had to disavow their actions to Pope Innocent XII in 1693.  Perhaps the inscriptions we see today, in a previous iteration before the most recent redecoration of the church, encouraged the faithful to lend the king spiritual support, while also hearkening back to a happier time, the thirteenth century, when a different Pope Innocent enjoyed a much more cooperative relationship with a different King Louis.

Whatever the origins of this inscription may be, it certainly fits perfectly into the design of this church.  The arms of the French king rest atop the pediment of the facade, and the interior is filled throughout with the fleur-de-lis.  The overall effect is to keep the “rex christianissimus” in Christianity, and the lines from Aquinas at the entrance help ensure that visitors will keep him in their prayers as well.

1"Humbly lower your neck [to be baptized], Sigamber [a name for Clovis]; adore what you have burned, and burn what you have adored."

2"Whoever prays for the King of France has an indulgence of ten days from Pope Innocent IV.