the Statue of St. Peter on Trajan's Column 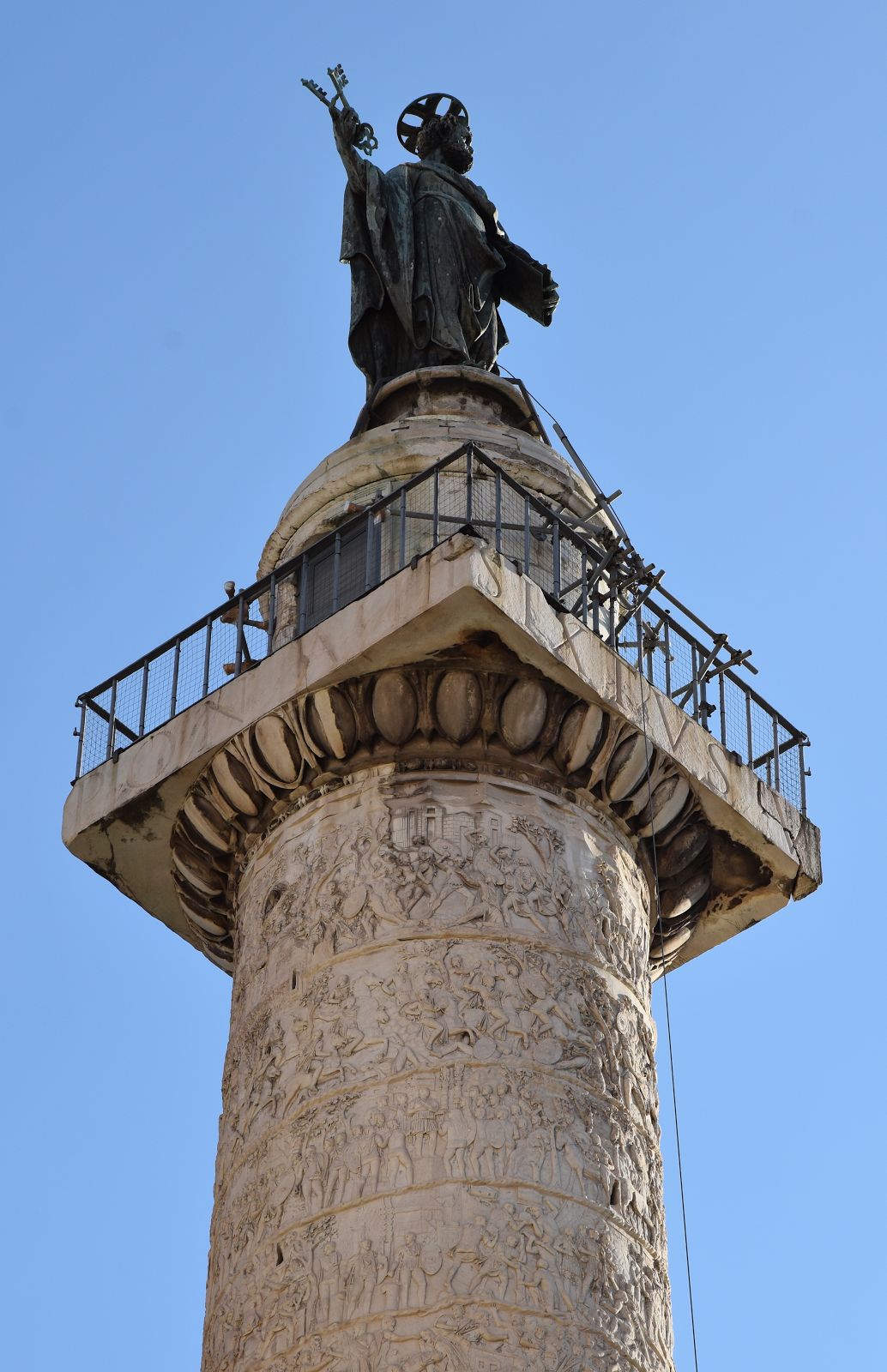 “If a man were called to fix the period in the history of the world, during which the condition of the human race was most happy and prosperous,” Gibbon writes in a passage as debatable as it is memorable, “he would, without hesitation, name that which elapsed from the death of Domitian to the accession of Commodus.”

Gibbon proceeds to praise the procedural norms and political freedom — “the forms of the civil administration” and “image of liberty” — that flourished under the emperor Trajan, his predecessor Nerva, and his successors Hadrian, Antoninus Pius, and Marcus Aurelius. Gibbon saves the most lavish compliment he can think of for the end of his paean: these five rulers aimed to be “accountable ministers of the laws.”

In so lauding the Nervan-Antonine dynasty, Gibbon — an English Whig and Enlightenment critic of Christianity — tells us as much about his own preoccupations as he does about the accomplishments of the five emperors in question. If, following Machiavelli (whose religious views foreshadowed Gibbon’s) we call these Five Emperors “Good” (buoni) we at least ought to ask, “Good” in what way? “Good” for whom? “Good” in comparison to whom?

A Trajan may seem good compared to a Caligula or a Nero, but that does not make him good absolutely speaking. To be sure, Trajan had many achievements, not least his victory over the Dacians (a Balkan people), scenes of which are etched into the Carrara marble of the triumphal column that still stands in the Forum of Trajan in Rome. But the Trajanic mélange of military victory abroad and economic prosperity at home – with a dash of the due process so beloved by Gibbon – did not produce a reign beneficent to all subjects of the imperium.

As evidence for this, we have Trajan’s own words. In one of the more remarkable literary artifacts of the principate, Trajan answers the letter of Pliny the Younger, governor of Bithynia and Pontus (a province in Asia Minor), about how to deal with accused Christians. Pliny begins the conversation, writing to Trajan to ensure that he has followed acceptable procedure in trying the Christians arraigned before him:

"I followed the following procedure with those brought before me on the grounds that they were Christians. I asked them whether they were Christians. If they professed that they were, I asked them a second and a third time, threatening to punish them. When they persisted, I ordered them to be taken away. For I had no doubt that, whatever the nature of their professed beliefs, their stubbornness and inflexibility certainly warranted punishment . . . As for those who denied that they were or had been Christians, after they invoked the gods in my presence and worshipped your image with incense and wine (I had ordered this image of you to be brought out together with the statues of the gods for this very purpose), and after they additionally cursed Christ – for it is thought that true Christians cannot be forced to do any of these things – I decided to let them go." (N.B., all translations are my own.)

"You followed the proper course of action, my Pliny, in investigating the cases of those brought before you for being Christians. It is not possible to lay down any fixed procedure for all cases. You should not go looking for them, but, if they are brought before you and proved guilty, they need to be punished. If, however, they deny that they are Christian and prove it through their actions, that is to say, by praying to our gods, they will, though previously suspect, obtain forgiveness through their repentance. But anonymous pamphlets should have no place in criminal proceedings, for they offer the worst example and are not fit for our era."

Trajan’s answer is essentially one of encouragement. Although Trajan warns Pliny against potential procedural errors – anonymous accusations, overzealous indictments, skewed standards of guilt – he takes no issue with the persecution of Christians as such. Rather, Trajan orders Pliny to keep prosecuting and punishing the Church: “If they are brought before you and proved guilty, they need to be punished” (si deferantur et arguantur, puniendi sunt). Trajan’s leniency toward apostates only accentuates his cruelty toward the faithful.

Given Gibbon’s antipathy toward Christianity and his obsession with procedural justice, it is easy to understand why he would celebrate Trajan. It is harder, however, to see why the Christians of Rome, once they had made the city their own, would leave a tribute to their tormentor – namely, the monumental column in Trajan’s Forum – intact.

Yet this is precisely what they did. The first generations of post-Constantinian Christians perhaps picked their battles wisely: Why bother with a war memorial when pagan priests still adore demonic deities and an idol adorns the senate house? The newly empowered Christians, the literary record shows, spent their political capital on removing the altar of Victory from the Curia and banning public sacrifice to the gods. Once the pagan temples had been closed, the old idols smashed, Christian leaders, by then part of the imperial establishment, may have been reluctant to remove the remaining monuments. Indeed, as the edifice of empire collapsed under the weight of barbarian hordes, Christian bishops were often the last pillars of Romanitas left standing.

After the empire’s fall in the West, the details of Rome’s imperial past gradually receded from collective memory. By the middle ages, many Romans did not know who Trajan was, most could not say much about him, and almost none had read his correspondence with Pliny. For medieval Rome’s Christian populace, the column was not so much a memorial to a bitter foe as a relic of a hazy past.

That is, until Renaissance learning drew the city’s attention back to its ancient history. With the explosion of classical scholarship and the proliferation of printed editions of ancient texts, Rome’s denizens could read Trajan’s words and connect his persecution of their Church with his column in their midst. Eventually, the bishop of Rome, who by then had served as the city’s temporal sovereign for some eight centuries, decided to do something about it.

In 1587, Pope Sixtus V, recognizing the incongruity of a monument to the Church’s oppressor at the heart of Christendom, topped it with a statue of St. Peter sculpted by the Leonardo Sormani and Tommaso della Porta. Although seemingly a small, even cosmetic change, this addition fundamentally alters the meaning of the monument. Trajan’s majestic column is turned into a mere pedestal for St. Peter’s statue. The monument to the imperial princeps is transformed to honor the princeps Apostolorum.

The statue’s placement over the column masterfully embodies Counter-Reformation theology. Pope stands over Emperor, a reminder that the papacy has endured far longer than the principate – or any other earthly power – ever did. Church towers over State, for, elevated by eternal Truth, the Church sees farther and wider than the State, whose less lofty outlook compasses only the transient and temporal. The Kingdom of God, established through self-sacrificing love, triumphs over the Empire of Man, extended through self-asserting war, and the executed fisherman takes the place of the apotheosized war hero.

This arrangement, then, is poetically just. When Trajan ruled Rome, St. Ignatius – who succeeded Peter as bishop of Antioch in Syria – was brought to the imperial city to suffer martyrdom ad bestias: “You heard that I travel in bondage from Syria, for the sake of our common name and hope, hoping by your prayers to get to fight with the beasts in Rome” (ἀκούσαντες γὰρ δεδεμένον ἀπὸ Συρίας ὑπὲρ τοῦ κοινοῦ ὀνόματος καὶ ἐλπίδος, ἐλπίζοντα τῇ προσευχῇ ὑμῶν ἐπιτυχεῖν ἐν Ῥώμῃ θηριομαχῆσαι, Ignatius of Antioch Ephesians 1). In so dealing with bishops, Trajan was following a precedent set by his predecessor Nero, under whom Peter was crucified: “He arrived at Rome, and had his priestly chair there until the final year of the reign of Nero, by whom he was martyred, crucified upside down” (Romam pergit, ibique . . . Cathedram Sacerdotalem tenuit, usque ad ultimum annum Neronis . . . a quo et affixus cruci, martyrio coronatus est, capite ad terram verso, Jerome, De viribus illustribus I). The roles emperor and bishop had played in life are now reversed in death: The martyr stands triumphantly over the persecutor. “He hath put down the mighty from their seat and hath exalted the humble.” 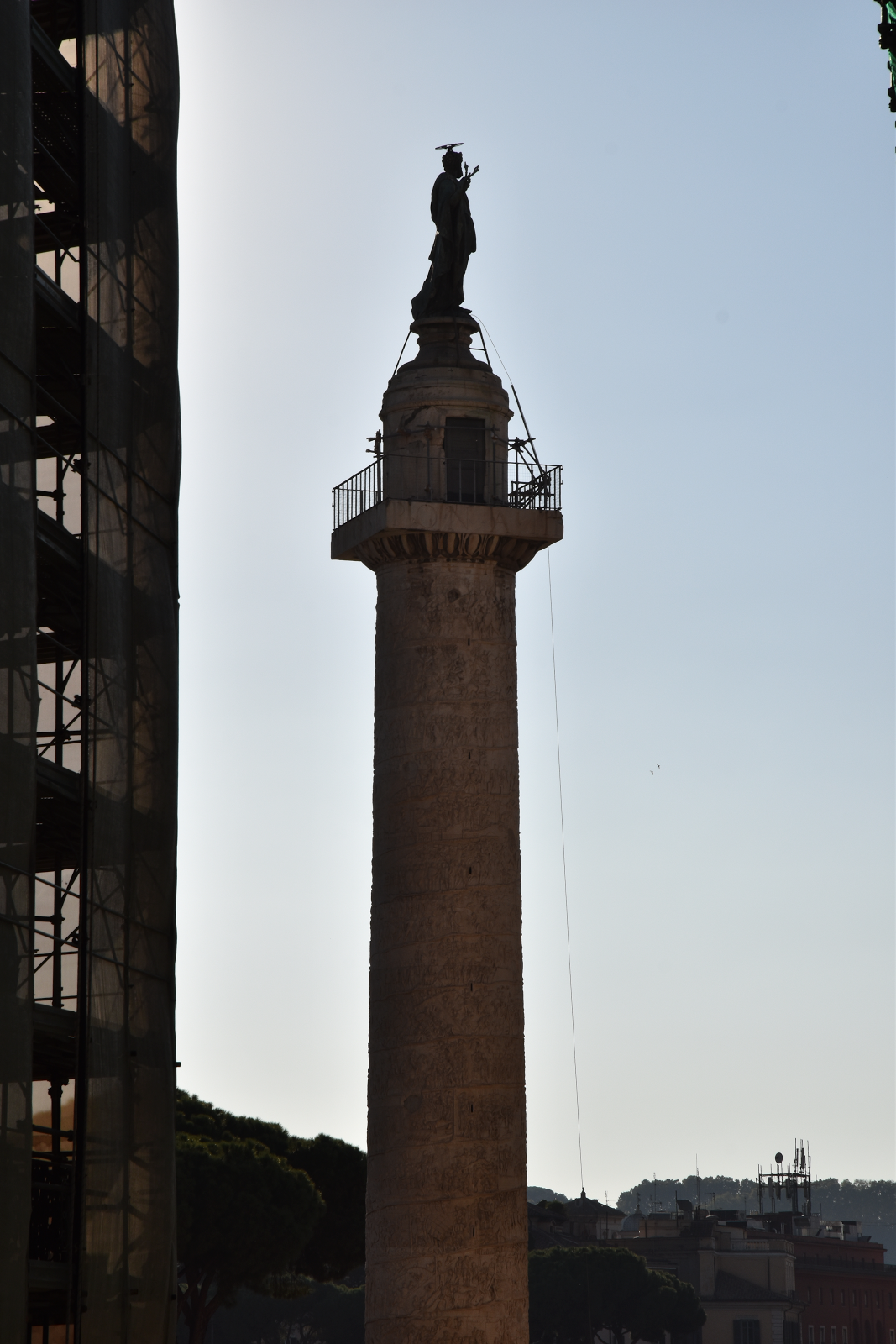