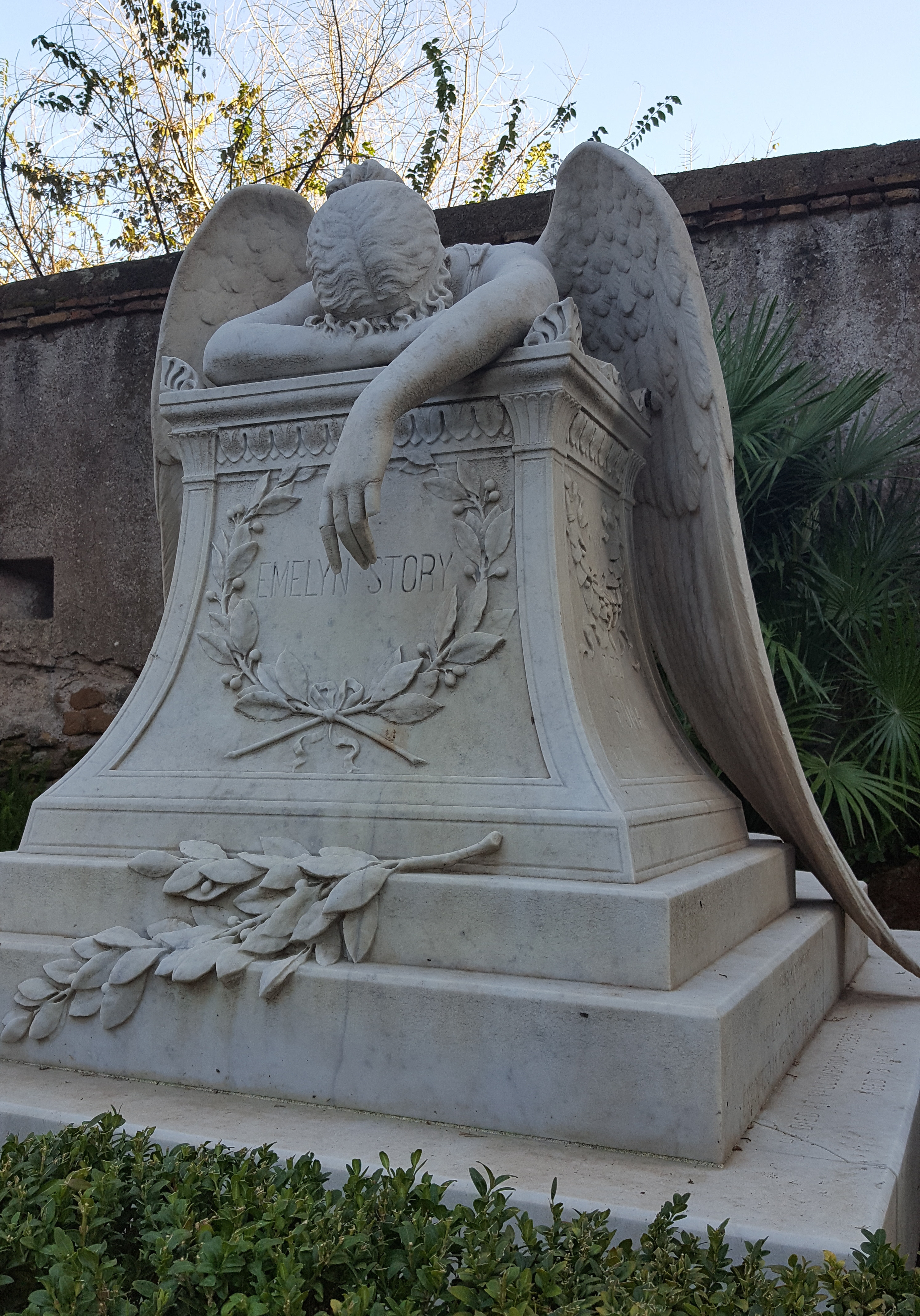 Walking through a graveyard is, in some ways, very similar to studying Classics. There are a lot of names you don’t recognize, a lot of strange designs and quotes and statues scattered about. The Non-Catholic Cemetery for Foreigners in Rome has numerous graves and tombstones— but for every name we recognize, like John Keats or Percy Blysshe Shelley, there are names that are much less familiar to us. What we sometimes forget is that even if we don’t know who these people were, they still have a story, and those stories are worth telling.

There is just one grave in particular I plan on talking about, of course, despite the number of other worthy tales in this cemetery. This grave is at the very back of the cemetery. Enter, head to the back wall, then take a left. There is an angel in this graveyard.

This in and of itself is not an odd sight: there are a lot of angel statues in a lot of graveyards. (My hometown even has a cursed one.)1 But this statue is different, because the angel is not standing protectively, wings spread over the grave, nor is she preparing to lift souls into heaven. This angel displays human weakness and sorrow; her wings do not extend heroically, but rather have slumped around her body, defeated and sad. The angel does not so much seem carved from stone than frozen in a moment of utmost grief. One can almost imagine her walking unsteadily forward to place flowers upon the grave when, unable to hold herself up any longer, the angel collapsed over the stone, one arm cushioning her face, the other extended in front. The flowers she once held in her hand have fallen to the ground. If you peer closer at her face, time has created dark tracks from her eyes over her cheeks. It appears as though she has spent the last hundred years weeping.

This is the grave of Emelyn Story.

Emelyn, born in Boston seventy-four years prior, died in Rome on the seventh of January in 1895. She was married to an American sculptor and poet, William Wetmore Story, for fifty-two years: their relationship was a long and happy one. One of W.W. Story’s friends quoted him saying about his wife, “she was my life, my joy, my stay and help in all things.”2 Upon his wife’s death, W.W. Story began the sculpture for her tomb: inscribed upon the stone are the words:

THE LAST WORK OF W.W. STORY

EXECUTED IN MEMORY OF HIS BELOVED WIFE

He himself died only nine months later, on October seventh at the age of seventy-eight. The grave is located next to that of their first child, Joseph Story, who was six when he died in 1853.

When I first saw this statue, having already heard the story of Emelyn and her husband, I was reminded of a particular Latin inscription I read during one of my first classes on Roman history. It tells the story of one unnamed woman, who many thought was named Turia (and whose name I will use here for the sake of simplicity), and what her life was like. This inscription is one of the longest extant funerary inscriptions, written by the woman’s husband in honor of her life and in mourning of her passing. He describes many times when she not only saved his life but also their fortunes and their family’s well-being during a time of political turmoil— specifically during what was likely the period of Augustus’ rise to power.

Like the Story family, this couple was together for many years: the Roman pair were married forty years prior to the wife’s death. Her husband says this concerning their marriage (which also gives some insight into the state of marriage during this time period): “Rara sunt tam diuturnal matrimonia, finite morte, non divertio interrupta.”3 A few lines later, he adds, “Utinam vestuta coniunctio habuisset utationed vice mea. Qua iustius erat ceere fato maiorem.”4

The whole of the text is haunting, filled with the longing of a husband for the woman whom he loved. He describes her virtues as innumerable and outstanding, tells us, as the readers, about their desire for children—to the point that she had actually proposed that they divorce so that he might remarry a woman who could give him children. He refused:

He did not want to even think on his wife’s proposal that they divorce so that they might be able to raise children. In part, this was because, during his time of exile and danger as a result of the political climate, his wife did not act as though he had died or would never return (even though it might have been safer for her to do so), and so now he refused to set her aside, even for the children they both desperately desired.

The two men in these stories were so overtaken with grief at the loss of their wives that they created these marvelous works. The unnamed husband from Rome says in words what our American sculptor displays so stunningly in a statue. Regardless of the outlet of their sorrow, the sentiments these two men felt for their wives, expressed in such uniquely beautiful ways, remind us that despite the nearly two-thousand years of separation, we are not so very different from those men and women who lived so long ago.

3) Line 27. "Marriages as long as ours are rare—marriages that are ended by death and not broken by divorce."

4. Lines 29-30. "I wish that our long union had come to its final end through something that had befallen me instead of you; it would have been more just if I, as the older partner, had had to yield to fate."