The Fresco of Sisinnius and St. Clement 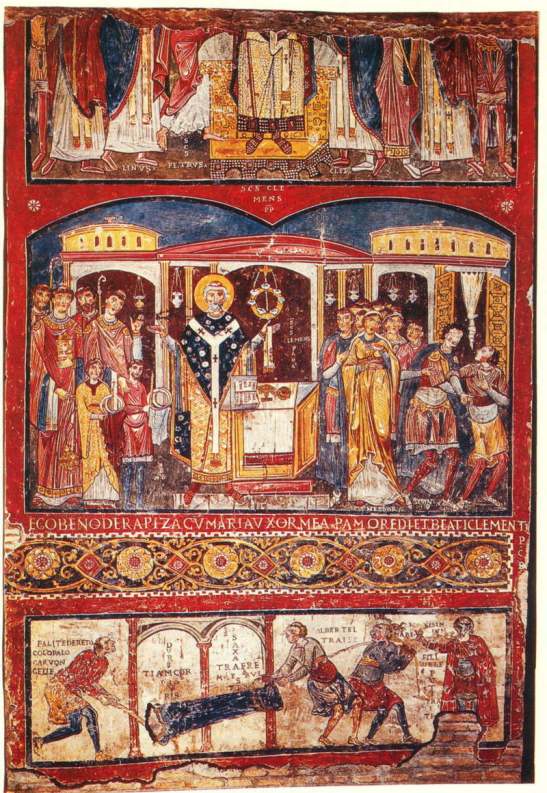 The Basilica di San Clemente is one of the most remarkable early Christian sites in Rome. The current church at street level dates from the 12th century, but it sits atop an earlier 4th century basilica built on the same spot. The earlier church, in turn, is above of a set of buildings from the first century AD which themselves contain the foundation of a Republican era house. The fresco shown above is in the 4th century basilica, but if you were to visit the excavations under S. Clemente today, you will find only a barely discernible faded image. The bright and vibrant image in this post is from a reproduction that the Irish monks in charge of the church commissioned when the fresco was first uncovered in the 19th century.1

The painting depicts a scene from legends concerning the life of St. Clement, which survive in a Greek hagiography of unknown date.2 In the first panel, a favorite (“φίλος”) of the emperor Trajan named Sisinnius has been consumed by jealousy and has followed his wife Theodora, who had recently converted to Christianity, to church.

The panel shows Pope Clement, exactly as the passage tells it, beginning the prayer (“εὐχή”). His arms are outstretched and held slightly up, a common position adopted for prayer in early Christian worship. Meanwhile Sisinnius, on the right, is being led out of the church by his servants after being struck blind and deaf.

The hagiography goes on to tell us that at Theodora’s request, Clement went to her home to cure her husband through prayer. When he gained his sight and hearing, however, Sisinnius took Clement for a magician and an adulterer and ordered his servants to seize him,

However, again a miracle intervened and his servants tried to grab a stone column, thinking it was Clement,

This scene is depicted on the bottom panel of the fresco. We see Sisinnius’s servants tugging at a column while Sisinnius himself, in full imperial outfit on the far right, urges them on. This panel is especially remarkable because the speech bubbles are some of the earliest known writing in Italian. On the left, the slave is shouting, “FALITE DERETO COLO PALO” (‘get behind with a pole’). On the far right, Sisinnius yells, “FILI DELE PUTE TRAITE” (‘Pull, you sons of whores’). Above the column, we see Clement’s response, written in Latin to underscore his more refined education and character: “DURITIAM CORDIS SAXA TRAERE MERUISTIS” (‘[because of] the hardness of your heart, you have deserved to pull stones’)

The legend of Sisinnius and Clement is a combination of elements from other stories concerning persecutions against Christians. The most obvious model is the story of Paul’s conversion in the book of Acts. Paul, who was then named Saul, set out for Damascus with the intention of arresting the Christians there and bringing them to Jerusalem. However, on the road, Jesus appeared to him as a burst of light and demanded that he cease his persecution.6 When Saul got up, Acts tells us “ἠγέρθη δὲ Σαῦλος ἀπὸ τῆς γῆς, ἀναφγμένων δὲ τῶν ὀφθαλμῶν αὐτοῦ οὐδὲν ἔβλεπεν· χειραγωγοῦντες δὲ αὐτὸν εἰσήγαγον εἰς Δαμασκόν. καὶ ἦν ἡμέρας τρεῖς μὴ βλέπων, καὶ οὐκ ἔφαγεν οὐδὲ ἔπιεν.”7 Like Sisinnius, Paul is struck blind to prevent his persecution and his servants have to lead him away by hand. Also like Sisinnius, Paul’s sight is only restored by the aid of a Christian. Acts tells us that a disciple named Ananias went to Paul and cured his blindness by laying hands on him.8

The legend of Clement and Sisinnius is representative of a kind of double rhetoric concerning converting pagans which is often found in early Christian texts. On the one hand, the example of Paul shows that conversions happen, and that even the most violent enemies of the church can become apostles. On the other hand, the example of Pharaoh shows that when conversions do not happen, the fault does not lie with lack of truth or righteousness on the part of the Christians. It lies with the hardness of their enemy’s hearts, a condition controlled only by God. Together they provide a powerful rhetorical tool to sustain a congregation through a period of persecution.