A Prison for the Perfidious and the Papal: the Tullianum 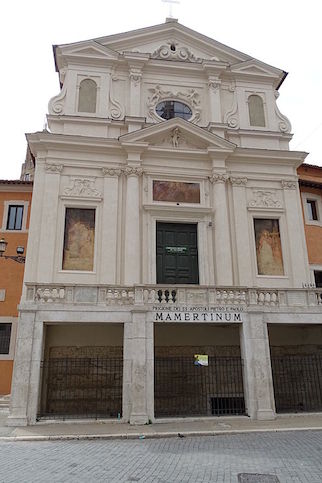 Wandering just a bit too far past the Forum Romanum, you’ll find a church, San Giuseppe dei Falegnami, that seems more or less like any other in Rome: Its medieval façade opens onto a pleasant piazza, with an exterior marble carving depicting scenes from the lives of St. Peter and St. Paul. Inside, candles and the requisite repository of Catholic ritual confirm your expectations as you meander between the pews, gazing upwards at the beautiful frescoes of scenes like the Nativity. But while the church itself may seem ordinary, it is in fact the site of a tortured and twisted history.

Below the frescoes and the pews and the altar, down narrow and twisty sets of stairs lies an ancient prison. Split into two layers, the dungeon is circular, carved out of the rock. It is exactly as unsettling and claustrophobia-causing as you might imagine, despite the placards and lighting that serve to remind you that it is only a historical exhibit. The gray tufa stone and the dirt floor meet in one corner at an altar. The seemingly perpetual dampness (whatever the weather outside in the piazza) and the eerie stillness that eclipses any other sound conjure the horrors of what must have occurred here centuries ago, in stark contrast to the appeal of the lovely church above.

Legend holds that the prison – at that time called the Tullianum, and later the Mamertine Prison – was founded in the fifth century BC by the king Ancus Marcius. Prisoners were lowered in from the levels above through a barred opening in the ceiling. Over the course of centuries, it famously held revolutionaries as they awaited execution, from supporters of the Gracchi brothers’ agrarian reform in the second century BC to supporters of the Catilinarian conspiracy in 63AD. Likewise, Sejanus, the famed Praetorian prefect accused of plotting to overthrow Tiberius, spent his last days there. It was also used to detain prominent enemy leaders and prisoners of war prior to their execution or participation in a triumph, including the Samnite leader Gaius Pontius of Caudine Forks fame, the Numidian king Jugurtha, a number of Cilician pirates, and the Gallic chieftain Vercingetorix.

But its most famous prisoners are the reason for the altar in the corner. The leaders of the Catholic Church, the foremost martyrs of Rome, Saints Peter and Paul, were both claimed to have been imprisoned there in their final days. The later Christian tradition describes their imprisonment and martyrdom in the 4th-century Passio sanctorum apostolorum Petri et Pauli:

After being condemned to death on the same day by the emperor Nero, the two apostles were held at the Mamertine Prison to await their sentence. The text and tradition confirm that the martyrdom and imprisonment took place in Rome, the center of the Catholic world, on the orders of the pagan Roman ruler. It notes that Paul was beheaded and that Peter was crucified upside down, which the prison’s small altar commemorates with an inverted crucifix. The earthly powerlessness of the saints is underscored by the frequent use of the passive voice to describe the imprisonment (“teneri Paulum et Petrum,” “deducti sunt,” etc.). This stands in stark contrast to what we already know: these are not ordinary criminals. Their submission to the imprisonment exemplifies their commitment to a power greater than the earthly realm, and their reward is assumed to be glorious on a heavenly scale. Pseudo-Marcellus describes Nero’s anxious reasoning for their martyrdom as the necessity of “male perdere” for “homines inreligiosos,” emphasizing the threat that Saints Peter and Paul represented to the religious and sociopolitical structure of contemporary Roman life.

The Mamertine Prison has borne witness to all the great moments of Rome, from the fall of the kings to the conquering of colonies to the Christian persecutions and subsequent ascendancy. Its cast of characters covers a vast range, including revolutionaries, pirates, enemies of the state, a pope. The various strands of power that have crossed paths there cover political, military, and spiritual realms. It has been the site of many a fall from favor, a reminder of the fragility of power, the instability of status. The dungeon has stood in testament through centuries of the horrors of humanity. In his memoir Pictures from Italy, the author Charles Dickens writes of visiting the prison: “Hanging on the walls among the clustered votive offerings are diverse instruments of violence and murder, brought here fresh from use…as if the blood upon them would drain off in consecrated air and have no voice to cry with.” This prison and this church have witnessed falls from grace, and grace itself in answer; power and sacrifice and justice and tragedy mingle here, in an eerie stillness that eclipses all other sound.

1) Then Nero had Peter and Paul held in chains. And after, Nero said to his prefect  Agrippa: 'It is necessary to destroy impious men completely.' And so Peter and Paul were led from Nero's sight. Paul was beheaded on Via Ostiense. Peter, on the other hand, said once he had come to his cross: 'Since my lord Jesus Christ, when he came down from heaven to earth, was raised on an upright cross, on the contrary is right for me whom he summons from the earth to heaven, and so my cross ought to expose my head to the ground, and to direct my feet to heaven: therefore, because I am not worthy thus to be on the cross like my lord, turn my cross.' And so they turned the cross and fastened his feet upward, but his hands indeed downward.