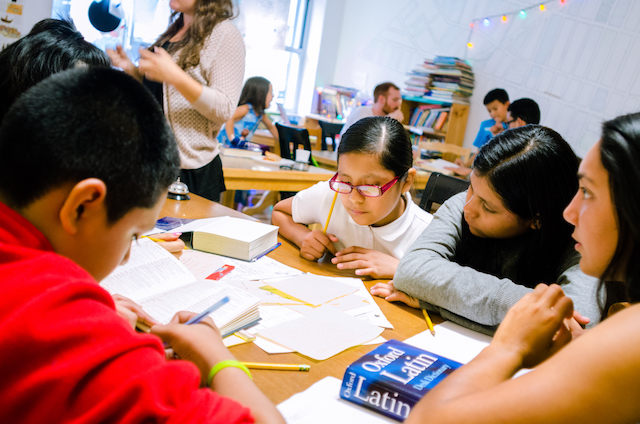 The Paideia Institute's Aequora: Teaching Literacy with Latin curriculum is an introduction to Latin for 5th and 6th grade students that develops English and Spanish literacy skills. An engaging workbook, classroom games, and creative activities introduce students to Latin grammar and vocabulary and to the cultures and mythology of the ancient Mediterranean world. Throughout, students draw comparisons between Latin and English grammar and use their knowledge of Latin vocabulary to decode English and Spanish words.

The Paideia Institute partners with elementary and middle schools to implement the curriculum in English language arts and Spanish language classes, providing both curricular materials and in-service teacher training.

The Aequora: Teaching Literacy with Latin curriculum is designed to be a weekly supplement to the English language arts and/or Spanish curriculum. The student workbook contains thirty-three chapters that teach the basics of Latin and introduce students to the cultures and mythology of the ancient Mediterranean world. Each chapter encourages students to draw connections between Latin and English or Spanish grammar and vocabulary. An eleven-chapter bilingual Spanish-English supplement complements the workbook, presenting Spanish translations of all Latin vocabulary and a narrative about children in Roman Spain.

The curriculum is designed not only to develop literacy skills, but also to encourage students to make meaningful connections between the ancient material and their own experiences. The textbook presents the linguistic, cultural, and socio-economic diversity of the ancient world. Discussion questions prompt students to explore the similarities and differences between ancient and modern societies, and to draw thematic connections between the material presented in the curriculum and their own lives.

Click here to downlaod a sample of the Spanish extension.

The program facilitator is on site for at least one hour weekly to team-teach the curriculum with the school's language arts or Spanish classroom teacher. It is not expected that the classroom teacher has any prior experience with Latin. The Paideia Institute selects facilitators from graduate programs in the city, including Columbia University, Fordham University, and the Hunter College MA in teaching Latin program.

Partner schools pay a modest fee to cover a stipend for the program facilitator overhead for Paideia Institute's supervision and assessment of the program. The fee is set based on the classroom size and number of hours per week that the facilitator spends on site.

The Paideia Institute is committed to assessing its programming, and we ask that our partner schools assist us by:

The Paideia Institute for Humanistic Study is a not-for-profit educational organization that is committed to increasing access to and engagement with the classical humanities at all academic levels. The Aequora: Teaching Literacy with Latin curriculum was designed by a team composed of Latin teachers with experience in socio-economically diverse public school settings, Latin graduate students, and ELL and language arts teachers.

Aequora program facilitators are graduate students in Classics with at least one year of experience teaching the Latin language. The Paideia Institute draws facilitators from graduate programs in New York City, including Fordham University, Hunter College, and Columbia University.

All Aequora facilitators are passionate about Latin and about teaching. The Paideia Institute believes that students learn best when they are actively engaged in the learning process and when they are having fun. Aequora facilitators strive to cultivate joyful, participatory learning environments, to create meaningful learning experiences for all students, and to empower students to express themselves through Latin.

About 60% percent of English words have Latin or Greek roots. An even higher percentage of scientific, technical, and academic vocabulary derives from Latin or Greek. Spanish, Italian, French, and other Romance languages are directly descended from Latin.

Studies of Latin initiatives in urban public schools in the 1970s-1990s indicate a positive connection between learning Latin and student literacy outcomes. In the 1970s, the Philadelphia public schools implemented an elementary school Latin curriculum to reinforce English literacy skills. In the first year, over 4,000 5th and 6th grade students received Latin instruction, and Latin students performed one year higher on the Vocabulary Subtest of the Iowa Test of Basic Skills than a control group who did not learn Latin.[1] In Los Angeles, Indianapolis, Washington DC, and New York City, instructors implemented and evaluated curricula modeled on that used in Philadelphia, and Latin students consistently scored higher on tests measuring word knowledge, reading, spelling, and even science and mathematics than both modern language students and students who had not learned a foreign language.[2] At the same time, teachers working with bilingual populations in Texas successfully implemented curricula that used Latin as a bridge between English and Spanish.[3]

The Aequora: Teaching Literacy with Latin curriculum is informed by the successful initiatives of the 1970s-1990s and by the experience of elementary and high school Latin teachers and language arts teachers currently working in urban public schools. The curriculum offers literacy training contextualized in an exciting introduction to the ancient world that invites students to use ancient societies as a starting-point for meaningful discussions about their own.