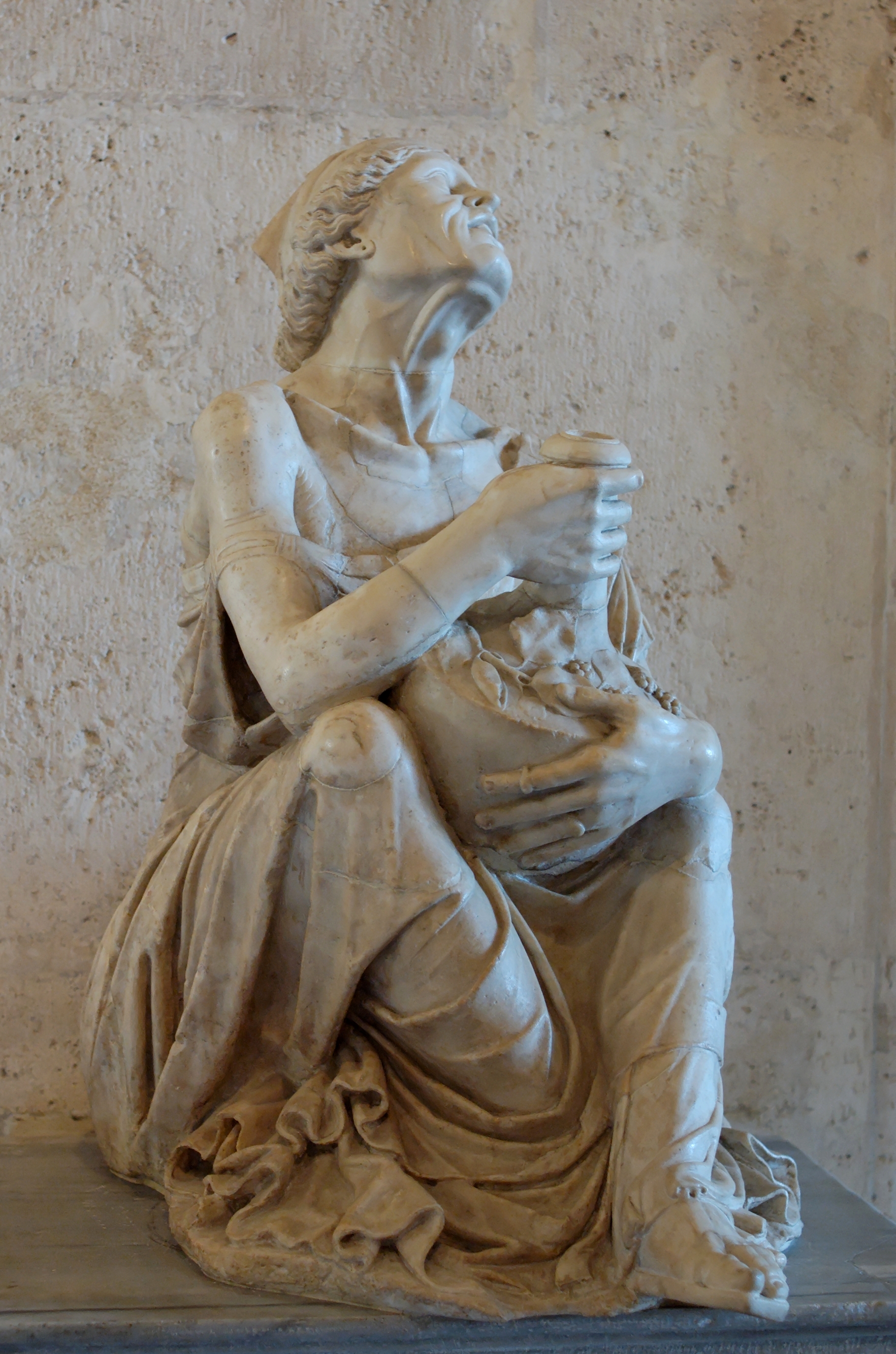 When my eyes fell upon the statue of the Vecchia Ebbra in the Capitoline Museum, I was so taken by the extreme anguish in the woman’s expression, that the realization of her drunkenness came to me secondarily.  Set in the same gallery as the ideal figures of Leda, Hercules, and Eros, this 2nd century Roman copy of a Hellenistic original is striking.  Crows feet spread from the corners of both eyes, deep wrinkles carve folds into her cheeks, and two front teeth are visible from her gaping, heavenward mouth.  Her collar bones and shoulder blades protrude noticeably, and the skin of her chest clings loosely to a sickly frame.  She wears cloak and chiton, both of which have slipped down revealing her shoulders.  Her fancy clothing along with her pierced ears and the two rings on her left hand reveal that she is a woman of wealth and status.  She sits cross-legged clasping a large vessel of wine, the Greek lagynos, decorated with the characteristic grapes and vines of Dionysus.

While the Vecchia Ebbra gave rise to feelings of sympathy for me, she most likely had a different impact on Roman audiences. Her title reveals three major strikes against her which to an ancient audience would have been unacceptable and even disgusting: she is old; she is drunk, and she does so while being female.  There were different standards for dignified, married women and women of the night.  If the Vecchia Ebbra is indeed a woman of status, her inebriated state is all the more shameful, for how well could a Roman matron, expected to demonstrate modesty and faithfulness, carry on with her housework and weaving while intoxicated?  Surely adultery was on her mind.  Prostitutes could be pardoned for living outside these parameters because of the useful service they provided.  But, when they reached the age of retirement, they lacked both the respect of a materfamilias and the get-out-of-jail-free card provided by youth and beauty.  I will focus here on some particularly nasty words regarding the age and insobriety of such prostitutes brought to us by who other than the Roman poets.1

In the following excerpt from Epigram 93, Martial enjoys exaggerating the appearance of the aged courtesan Vetustilla2:

As demonstrated above, once a woman began to show signs of aging, she was exiled from the realm of sensual interest. She even became a figure threatening to the possibility of arousal.  In Horace’s 12th Epode, the narrator blames the courtesan’s age for his performance:4

These poetic sentiments regarding feminine aging are in good company.  The poet and his audience clearly got a kick out of the exaggeration of elderly female unattractiveness and the accusation of their increased sexual appetite.6  However, the fact that the Vecchia Ebbra is drunk is as important to consider here as her age.  Drunkenness, and its implied uncontrolled state, is closely connected to unacceptable sexual conduct and is often used as evidence of a powerful woman’s transgressions.  One can recall Horace’s famous Nunc Est Bibendum ode in which he slanders Cleopatra for being “intoxicated by Fortune” and for having a “mind driven wild by Mareotican wine”.  Cicero, too, used drunkenness as a means to disparage Clodia’s character in the Pro Caelio.  The drunken rituals of the female Bacchantes also made some Roman audiences deeply uncomfortable.  Propertius brings the anxieties surrounding both female age and drunkenness to light in Elegy 4.57:

The broken amphora presumably causes the wine-crazed procuress distress in the afterlife, and the fig tree could here be suggestive of fertility.  When considering the attitude Roman poets took toward aging women and their inappropriate, wine-soaked sexual desires, the statue of the Vecchia Ebbra stands in a less forgiving light.  I now take a closer look now at her cloak and chiton hanging loosely off her shoulders.  Rather than simply showing that the old woman is a mess, her partially revealed chest seems to be a sensual invitation. Even the Vecchia Ebbra’s hair suggests transgression: though arranged carefully and mostly contained within a headdress, a few locks scandalously escape.  Her open mouth, from which I originally imagined a cry of desperation, of pain, of sadness, may more realistically issue a cry of intoxicated ecstasy.  The ancient male assertion that a woman’s drinking was tied to her sexual appetite fell most harshly upon women of age, while today’s younger generations of women seem to suffer a similar prosecution.  Maybe older Roman prostitutes and upper class matrons who were thus judged and isolated from society would have indeed sought comfort in a amphora filled with unmixed wine.

(1) Some of these poems, so vile to our modern sensibilities, are often entirely omitted from translated collections.

(2) "Although you have seen three hundred consuls, Vetustilla, and you have but three hairs and four teeth, the chest of a grasshopper, the legs and color of an ant; although you bear a forehead more creased than a stola and breasts like spider webs; (…) and although you see as well as an owl does in the morning, and you exude the stench of the the she-goats’ husband, and you have the behind of a skinny duck; (…) although the bath attendant admits you only when the lights are off, and even then solely amongst the grave-frequenting prostitutes; (…) you nevertheless dare to think of marriage after two hundred years of widowhood, and insanely seek a satisfying itch for your ashes. (…)"

(4) "This sweat and - equally bad- this odor grows over her shriveled body, as is hastens, with my organ now slack, to restrain my untamable passion; the damp white chalk no longer remains on her face, nor the color painted from a crocodile’s excrement, and already in heat, she breaks the bed and canopy."

(5) The chalk and crocodile excrement refer to the older woman’s make up.  She cannot hide her age despite attempts to cover it with cosmetics. Men preferred young mistresses to shine with natural beauty.

(6) It is important to remember when reading these sources, that what we might view as extreme misogynistic rhetoric, was for an ancient poet, par for the course.  One can consider the role obscene humor plays in some of today’s most appreciated comics. Nevertheless, such rhetoric can still give us a window into societal expectations and taboos.

(7) "I saw the cough congeal in her wrinkled throat, and the blood spit out from her hollowed teeth, and I saw her exhale her decaying soul onto her father’s mat. (…)  Let the tomb of the old procuress be an amphora with a broken neck: may you, fig tree, bear down your force above her."