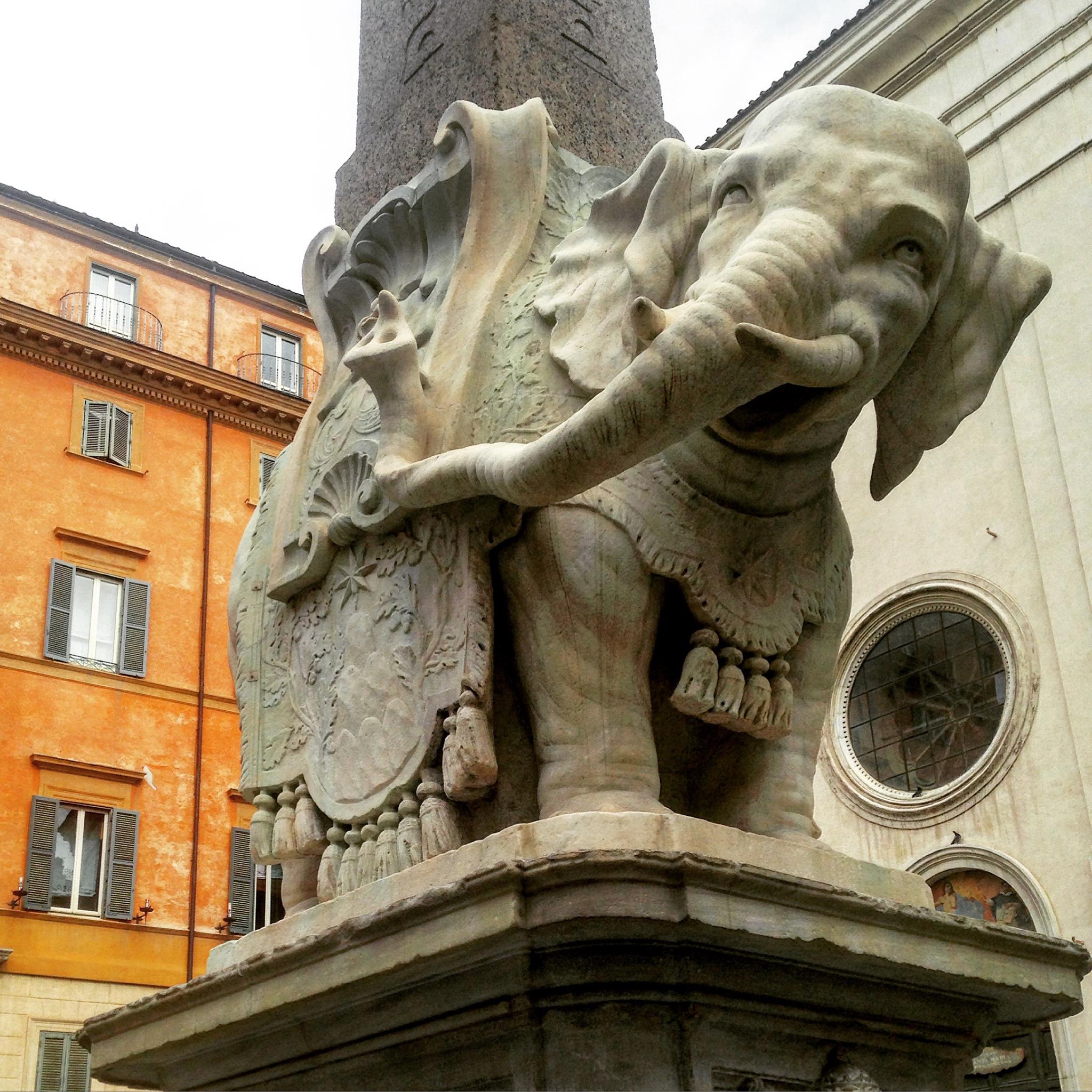 There is a most curious artwork outside out of Santa Maria sopra Minerva that many visitors to Rome will have come across but few will have understood: the elephant obelisk by Gian Lorenzo Bernini.  The question often asked--most naturally--is why on earth is an elephant under that obelisk?  The answer, at least in part, can be found between the inscriptions on the plinth of the sculpture and the symbolic tradition of elephants.

The inscription facing away from the Church is the dedication by Pope Alexander VII:

This inscription, while describing the change of the church and surrounding forum from pagan to Christian, does not address the elephant specifically, although we will want to keep in mind divinae sapientiae as we move to read the inscription on the other side of the statue's base:

Here, some justification is provided for the elephant. The Egyptian obelisk represents ancient wisdom, and since the elephant is able to bear it on its back, the physical strength represented translates easily into mental fortitude.  In other words, the elephant is shown strong in two ways: physically, by its support of the obelisk (fortissima belluarum), and mentally, by its figural support of the ancient wisdom represented by the obelisk (documentum intellige robustae mentis esse solidam sapientiam sustinere).

Why, though, is an elephant bearing the burden of ancient wisdom? After all, any other strong animal could provide the same figuration.  As it turns out, the elephant has long been thought to have a vigorous mental capacity. In our time, we have the proverbial intellectual aptitude of elephants: they never forget. This same perception of the strongest of beasts extends back into the time of the Greeks and Romans.

Pliny the Elder (23-79AD), in his Natural History, addresses the elephant at the start of his disquisition on mammals (Book VIII, I):

Clearly, Pliny held elephants in great respect, elevating their intelligence and sensibility to the level of humanity and beyond (quae etiam in homine rara).

This reckoning of the elephant does not disappear with the ancient Romans but continues through the middle ages. Saint Isidore of Seville (c. 560-636), who was familiar with Pliny, writes:

Later on, the Aberdeen Bestiary (c. 1200 AD), one of the natural history catalogs of the medieval period, repeats Isidore almost verbatim in its initial description:

The text of the Aberdeen Ms. then departs from Isidore and Pliny and moves to describe the elephant in terms of Christian symbolism.

Here, the mating habits of the elephant are interpreted with reference to the Fall of Adam and Original Sin. A few lines later, the metaphor is carried even further (perhaps too far):

The metaphor unites the elephant and Christ!  In light of this, the inscription on the base of Bernini's statue takes on an extra dimension: Christ, whose abundant, divine wisdom led to his death but also to the salvation of mankind, is the elephant who overcame the deficiencies of man, represented first in Adam (who was, presumably, the first and insufficient elephant).  By this drawn out and somewhat conceited parallel, the elephant has become a symbol for Christ and his divine wisdom.  Surely, then, it is up to the task of bearing a small obelisk!9

The Aberdeen passage goes on to name other virtues of the elephant, but now these virtues resound with Biblical reference.  For example, just as so many people wandered in the desert only to be saved by God's guidance, so too do elephants guide similarly lost travelers:

The passage continues to metaphorize and symbolize beyond this and is worth a read, but it's time we conclude our investigation here.  Through this quick literary tour, we have discovered that the elephant is not only the strongest and smartest of land animals: it is also both Adam and Christ, the two poles of the human condition, the Fall and the Redemption. As we have seen, the elephant's nature compels it to undertake a mating ritual which the Aberdeen relates to the Fall of Mankind, but in turn its capacity for wisdom redeems it and enables it to become, in the same manuscript, a symbol for Christ.  I do not know if Pope Alexander VII was aware of the particular symbolism of the elephant as revealed in the Aberdeen manuscript, but its explanation of the animal, along with those of the other sources presented here, help us to greater appreciate the confluence of ancient and divine wisdom; man, beast, and God; and pagan and Christian that is the Piazza della Minerva.  They have also helped us better understand the reason, at least in part, for the tiny elephant beneath the obelisk.

1 "This ancient obelisk,former monument to Egyptian Athena (Isis),unearthed and erected in the forum once dedicated to Minerva and now dedicated to the Mother of God,to the divine wisdom Alexander VII dedicated in the year of Salvation 1667."

2 "Whoever you are who sees the figures of wise Egypt engraved on the obelisk borne by the elephant, strongest of animals,know that it is proof of a robust mind to bear strong wisdom."

3 "Let us come to the remaining animals; first, the land mammals. The greatest is the elephant, and it is also the closest to human sensibility. Indeed it has understanding of the speech of its own country and is obedient to orders. They say that it remembers its duties and is capable of affection and seeking glory. Moreover, in elephants are qualities rarely found in people: probity, prudence, fairness, and religious belief, such as veneration of the stars, sun, and moon."

4 "This sort of animal is fit for war, and on them the Persians and Indians put wooden towers, from which they fight as if from a wall. Elephants have also intelligence and a good memory."

5 "no larger animal can be found. On elephants, the Persians and Indians fight on wooden towers as if from a wall. Elephants have a vigorous intellect and a good memory."

6 (Folio 10r) "If the elephant should wish to have children, it goes to the east, somewhere near Paradise, for in the east is a tree called mandragora, to which it goes with its mate, who first picks a fruit from the tree and then gives it to her mate. Thus she seduces him until he eats the fruit, and immediately after this she is impregnated. "

7 (Folio 10v) "The male elephant and his mate are a metaphor for Adam and Eve. For when they were in the flesh pleasing to god, before their sin, they did not know about mating and did not understand how to sin. But when the wife ate from the tree, by which is meant that she gave her mate the mandrake fruit, she became pregnant, and thus they left paradise."

8 (Folio 10v) "But the understanding elephant—that is, our lord Jesus Christ—although he was the greatest of all, became the smallest, because he had great humility and was obedient until his death. For this reason he raised up mankind."

10 (Folio 10v) "Certainly if they should see a man wandering around the desert, elephants will lead him back to recognized roads."