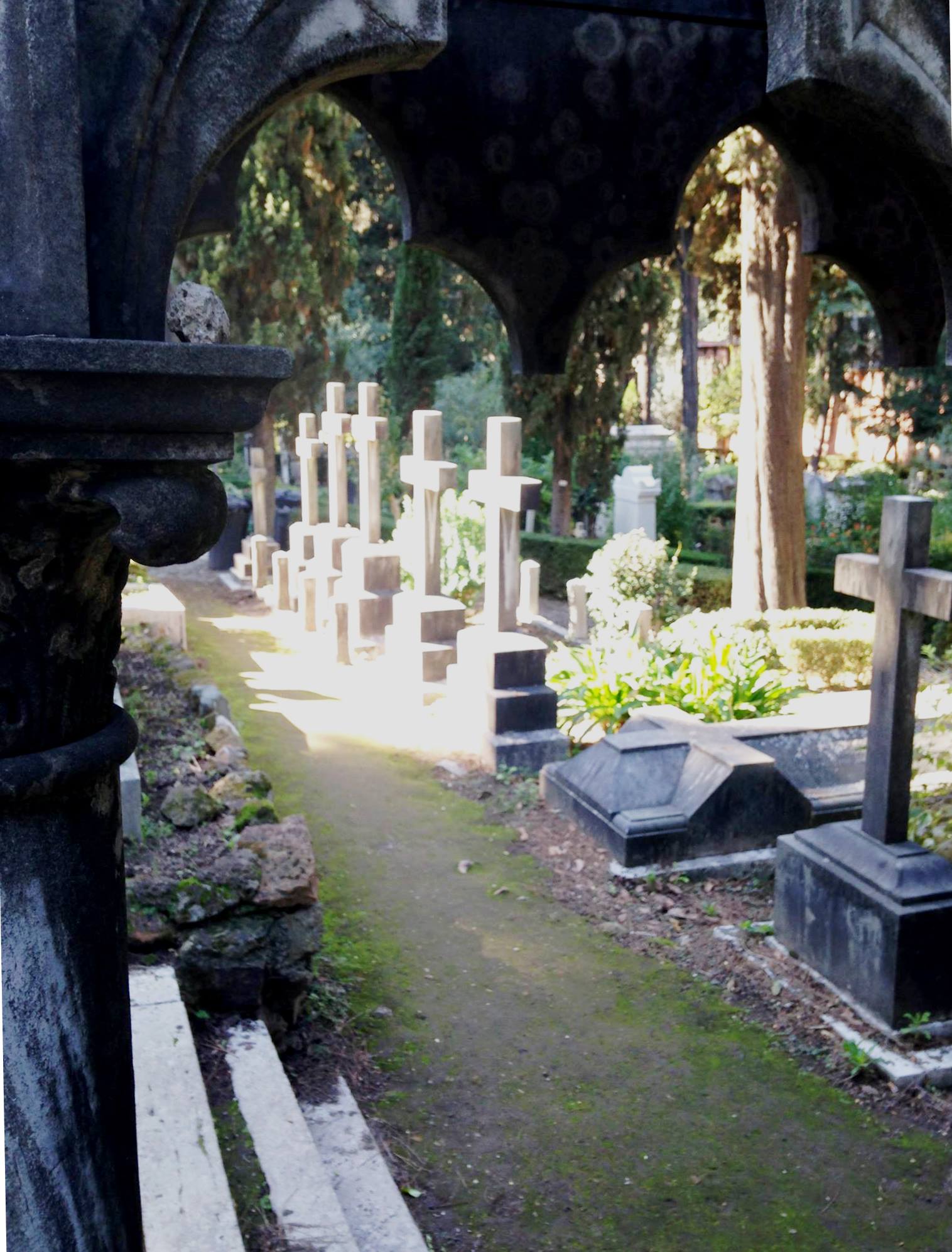 The Protestant (now called, more accurately, Non-Catholic) Cemetery of Rome, marked to passersby by the pyramidal monument of Gaius Cestius inside--one of the non-Protestant residents--is full of memorials to the dead.

Memorials take different forms, and epitaphs come in a variety.  Some recall praiseworthy deeds of the interred.  Others are sparse and feature only a name and two dates.  Not a few wax poetic, some more fittingly than others (Shelley and Keats are both buried here).

On my most recent visit, I was struck by one epitaph in particular, not only because of its affecting words, but also on account of its similarity in form and substance to many ancient Roman epitaphs.  It reads so: 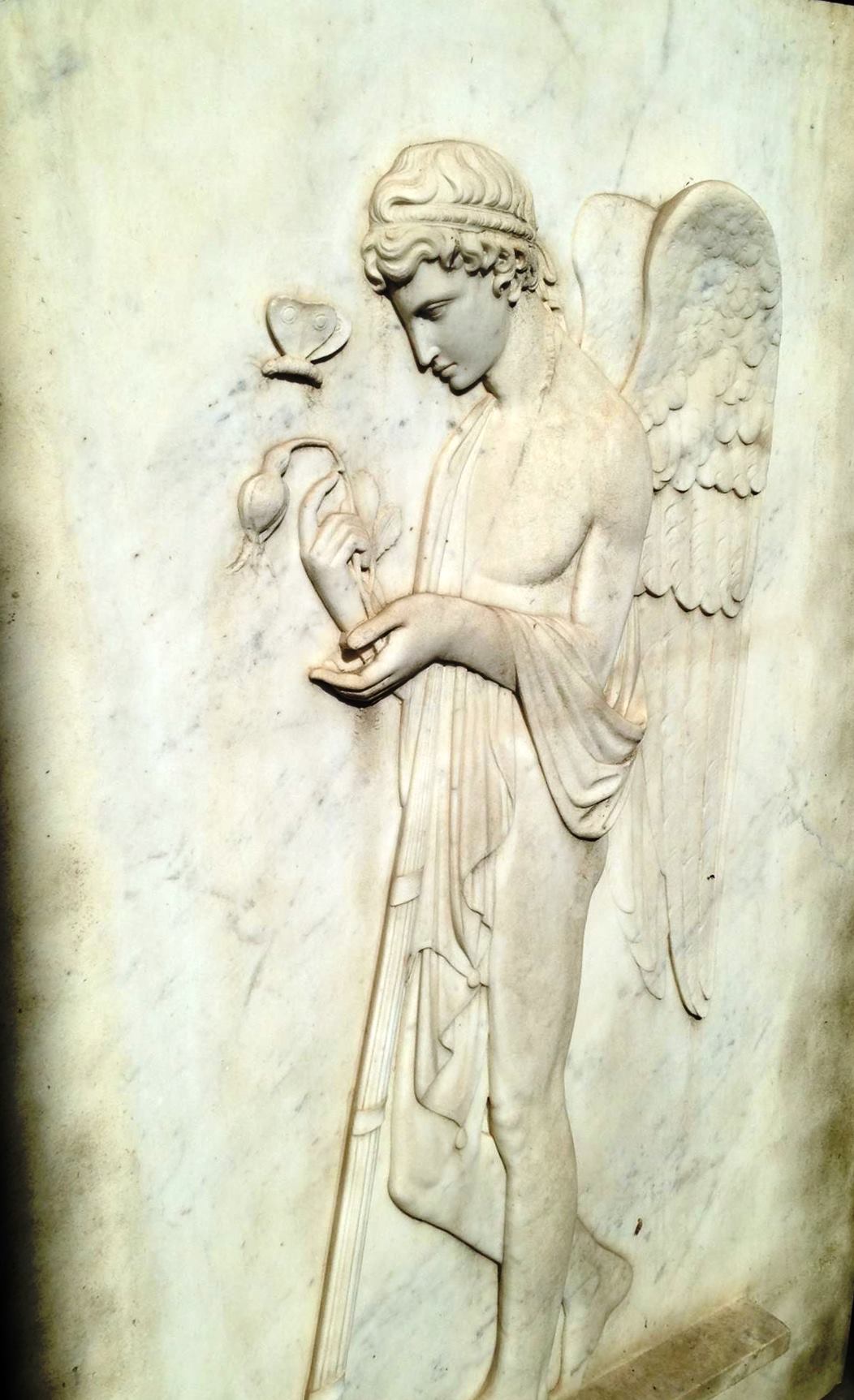 Beneath this stone are the remains of Rosa Bathurst, who was accidentally drowned in the Tiber on the 11th of March, 1824, whilst on a riding party, owing to the swollen state of the river and her spirited horse taking fright. She was the daughter of Benjamin Bathurst, whose disappearance when on a special mission to Vienna, some years since, was as tragical as unaccountable, no positive account of his death ever having been received by his distracted wife.  He was lost at 26 years of age. His daughter, who inherited her father’s perfections both personal and mental, had completed her 16th year when she perished by as disastrous a fate.

READER, whoever thou art who may pause to peruse this tale of sorrow, let this awful lesson of the instability of human happiness sink deep in thy mind.  If thou art young and lovely build not thereon, for she who sleeps in death under thy feet was the loveliest flower ever cropt in its bloom.  She was everything that the fondest heart could desire, or the eye covet, the joy and hope of her WIDOWED MOTHER, who erects this poor memorial of her irreparable loss.

Early bright transient chaste as morning dew, she sparkled, was exhaled, and went to heaven.

The specific form I found similar to ancient Roman epitaphs is the direct address to the READER, which on the original gravestone is the only word on its line, centered and capital-lettered.  The overall message, however unfortunate, is one as old and older than the ancient Romans: death can come to anyone at any time.  This memento mori is made all the more moving and thought-provoking by the relative youth of the deceased: if Rosa Bathurst, in the spring of life, can be taken away so abruptly, then so too can....

A very similar inscription, both thematically and formally, was found at Monteleone Sabino, northeast of Rome:

Another mother buries a daughter taken away inexplicably soon.  Here, the message of memento mori is rather implicit.  The same goes for an inscription from Transpadana commemorating another girl who died young, this epitaph being in the voice of the deceased:

The first-person voice adds considerable pathos to the account.  Another inscription from the same region offers a more overt memento mori:

It is easy to see the similarities between these ancient epitaphs and that of Rosa Bathurst.  Indeed, this form of commemoration has been picked up on by many others, including one Petrus Alphonsi, a Jewish-Spanish writer who converted to Christianity sometime in the late 11th century.  Along with thirty-two other tales drawn from Arabic and Persian sources, he wrote a short story called Exemplum de philosopho per cimiterium transeunte, "A Lesson about a Philosopher Passing Through a Cemetery," that goes something like this [capital letters marking line beginnings]:

The first asks the passerby to wish the deceased well as they rest eternal; the second, somewhat more material-minded, asks the viator not to harm the monument.

Looking at these epitaphs, it seems that encouraging an interaction between the dead and the living is of greater concern than solely commemorating the dead.  In other words -- and as the title of this post forewarned -- memorials are often made as much for the living as for the dead, as much as for that viator or lector or hospes who comes upon a grave monument as for the one interred.  As we have seen, the limbolike interactions promoted by the form and message of an epitaph are various, ranging from warnings against sepulchral desecration to prayers on behalf of the deceased.  Most persistent -- or pernicious -- seems the interaction whereby the death of the interred individual is used to admonish the reader: sum quod eris; quod es, ipse fui.  I am what you will be.  What you are, I once was.  In short, memento mori.

P.S. You can imagine how much this message hit home when I came across a very plain, dust-worn tomb while leaving the Protestant Cemetery, laconic and nondescript in every respect save one, for it read: Charles Williams Wren.  Oh, potential ancestor, your gravestone is full of such thoughtsome noise!

(1) "To Posilla Senenia, daughter of Quartus, and Quarta Senenia, freedwoman of Gaius.  Stop stranger and read through what is written here: A mother was not allowed to enjoy the presence of her only daughter.  I believe that some god or other envied her life.  Since it was not allowed for her to be brought up by her mother in life, after her death her mother made this, at the limit of her time, as was due: she has brought up a memorial for her whom she had loved." [Text and translation, slightly altered, here and for following epitaphs provided by the C.I.L. and attalus.org]

(2) "Stranger, stop and look at this lofty tomb, which contains the bones of a little life of tender age. Here I lie buried whose tender age was in its spring-time. I brought dignity to attend on my duty, my wool-making. Plaint fills me at Fortune's lot so hard and unfair. Should you ask my name, the name of 'Salvia' would rise up. I will bid you farewell, stranger. I would like you to be happier."

(3) "Manlia Sabina, daughter of Lucius. My parent I loved as being my parent, my husband I cherished in the second place after my parent. Thus was my life's account proven spotless. I bid you farewell, stranger. Live your life, death is already on its way for you too."

(4) "It is said of a certain philosopher that while he was passing through an ancient cemetery he saw a marble tombstone placed above the ashes of one deceased.  On the stone were verses explaining the thoughts of the dying man to passersby:

You who pass near here and do not say farewell, hold your passing, and bear your ears and soul to my words: I am what you will be, and that which you are, I myself once was, a mocker of bitter death, at least while I was able to enjoy life with salutary peace.  But death was coming after me, and after it took me from my friends and household, my family, stripped of its parent, buried me in the earth and mourned me as I lay there.  Then they gave parting gifts with my ashes.  Thereafter the earth ate away at the former glean of my face, and the great glory of my former beauty rests here.  You would not be able to recognize the man I was if you saw me now, if I was somehow removed from the earth.  Please entreat God on my behalf with a chaste mind, so that he might let me enjoy eternal peace.  And whoever entreats on my behalf, let God gather them as one, so that they will remain with me in heaven.

Again and again the philosopher pored over these verses, and, with the things of the world left aside, he became a monk."

(5) "Hail! Herennia Crocine, dear to her own, is shut up in this tomb, Crocine dear to her own. My life is over; other girls too have lived their lives and died before me. Enough now. May the reader say as he departs, "Crocine, lightly rest the earth on you." Farewell to all you above ground."

(6) "Stranger, stop and "turn your gaze towards this hillock on your left," which holds the bones of a poor man "of righteousness and mercy and love." Wayfarer, I ask you to do no harm to this memorial."