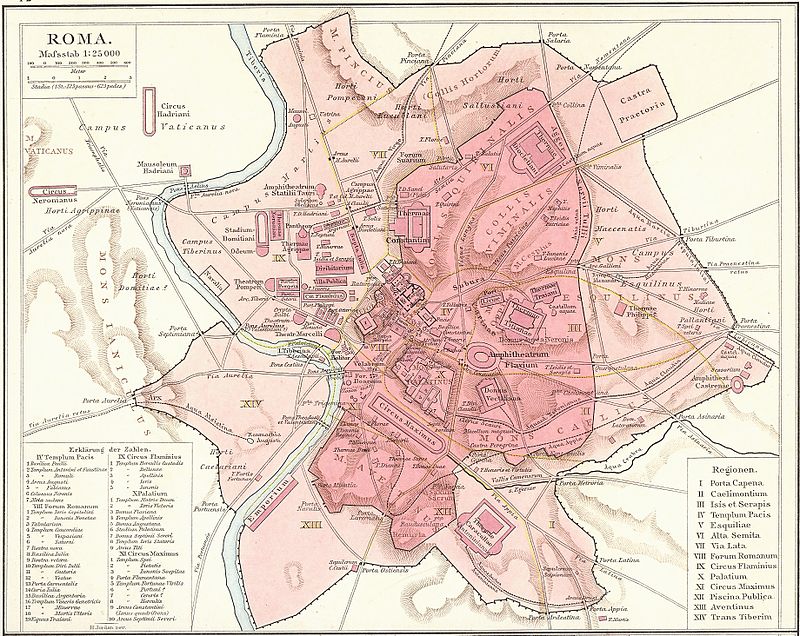 As much as Rome was a city of marble temples, basilicae, and fora — and to some less-than-Augustan extent still is — it was also a city of gardens.  Indeed, the Roman name for the Pincian Hill, collis hortulorum, might be easily adapted to describe the whole city: colles septem hortulorum, aut urbs hortulorum.  Unfortunately, the city of herbs, flowers, and grass has suffered as much as the marmoreal one, and many of the great gardens of ancient Rome, not to mention those formed in the Renaissance by the wealthiest of Rome's patron families, have withered or been unforgivably uprooted (let us not even mention the dreadful subsequent history of gardens built-over).

Nonetheless, some mostly-forgotten and long-disappeared gardens have left to today's hortophiles comforting vestiges of their former glory.  These left-behinds, both material and literary, are not so much secret as easy to overlook or underappreciate: lacking the contextualizing garden, they are hard to apprehend and appropriately awe.  After all, these gardens and the objects in them were glorious, rivaling the best gardens we can see today (think Villa d'Este).

During the early Roman Empire, the Esquiline Hill (to the east) was a site of such gardens.  Gaius Maecenas, the patron of Horace and Virgil, had a green plot along the Servian (old Republican) Wall (look for Horti Maecenatis; it's there!) (1).  Later on, Nero would seize much of the area in the valleys between the Esquiline, Caelian, and Palatine Hills for his Golden House, which stretched to abut the gardens of Maecenas (2).  The Golden House, needless to say but as we will see, possessed magnificent gardens of its own.

One of the gardens near Maecenas' was owned by Lucius Aelius Lamia, a consul of 3 AD.  His plot centered on modern-day Piazza Dante and Via Ariosto.  Like the gardens of Maecenas would be upon his death, Lucius' were bequeathed to the Imperial family (likely first to Tiberius).  They were so appreciated by Caligula in the 40s AD that his funeral was held in them, as Suetonius describes:

After the sacks of Rome and dissolution of the empire, the deconstruction and redistribution of the city during the Middle Ages, the gardens of Lucius fell into desuetude.  Some excavations in the 16th century were undertaken, but it was not until Rodolfo Lanciani, the revered Italian archaeologist, came in the 19th century that great discoveries were made.  Within the garden complex were found beautiful frescoes, marbled pavements, and an amazing array of sculptures, such as the Esquiline Venus and the portrait of Commodus as Hercules below. 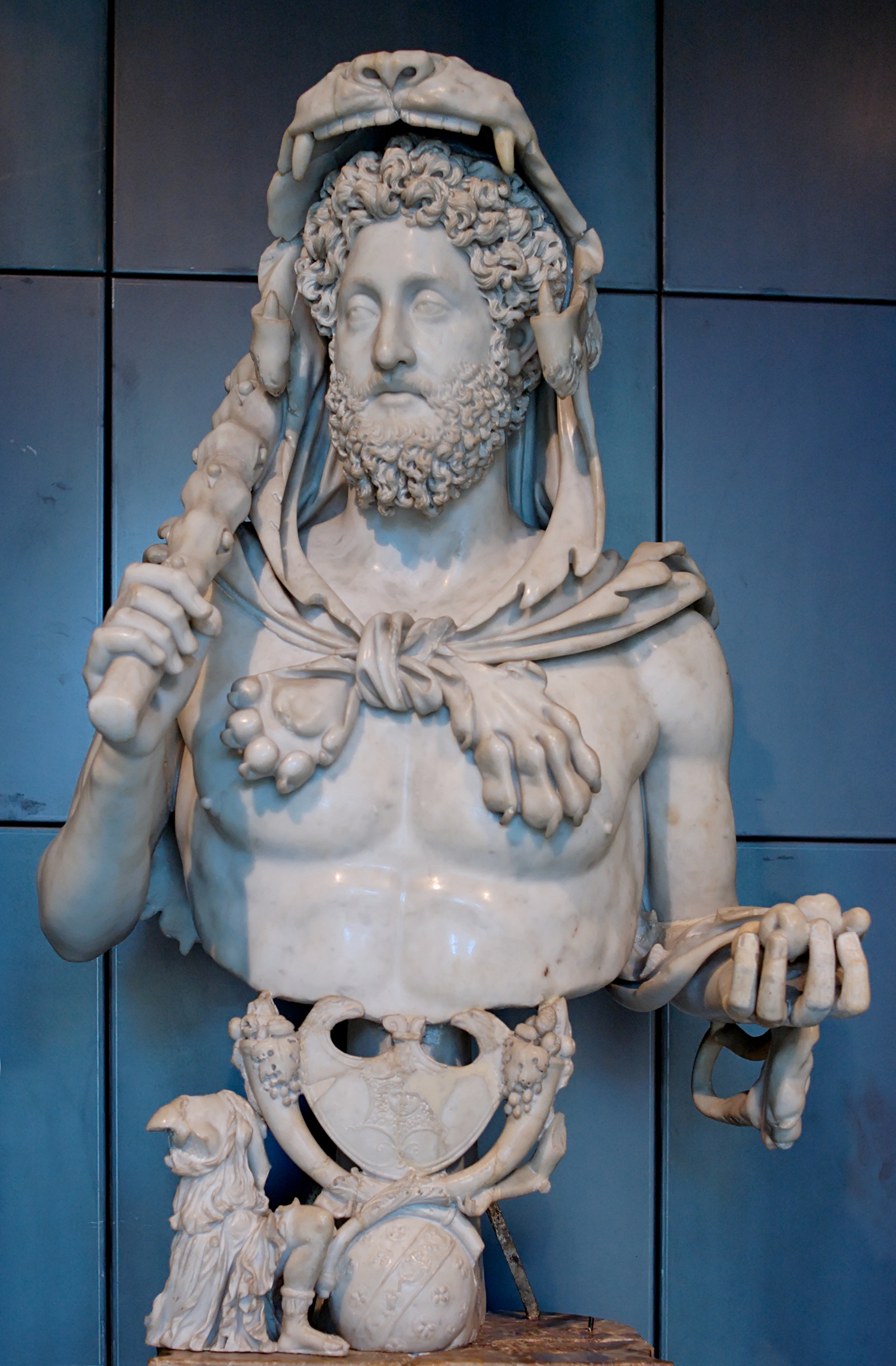 These sculptures can now be seen in the Capitoline Museums in a section, relegated to the bottom floor's circumambient hallway, devoted to works discovered in the once-gardens of L. Aelius Lamia and Maecenas.  Nearby the sculptures are to be seen a marvelous section of marbled floor and various gilt ornaments and jewelry.  What emerges from these artifacts is a picture of decadence and material splendor: the complex of the Horti Lamiani was clearly a place of pleasure for wealthy members of high society, first for wealthy patrons like Lucius Aelius Lamia, and then for the Imperial family.  Glorious, in other words.  The marble floor extracted from a partly preserved passageway is here:

Rodolfo Lanciani reveled in the luxury of the Lamian gardens during his excavation in 1875:

“I saw a gallery of 79 meters in length, where the floor was made up of the most rare and expensive varieties of alabaster (which was told Palombara from the name of the villa) and the ceiling supported by twenty fluted columns of yellow antique, resting on golden bases; I saw another room, paved with slabs of peacock eye, whose walls were covered with slabs of black slate, decorated by graceful arabesques executed in gold leaf; I have seen finally a third room, where the floor was composed of segments of alabaster, framed by green glass paste. In the walls of it were all around various jets of water a meter away from each other, which had to cross in various ways with extraordinary effect of light”.

This description of the halls reminds me of another description of horticultural opulence. Suetonius describes the Golden House of Nero, which contained its own greensward among its other amenities and rarities — and, do not forget, stood right next to the gardens of Maecenas and Lamia — similarly:

If the gardens of Lucius Lamia were anything close to Nero's Golden House in splendor (if not in size, since there literally wasn't room for two golden houses in Rome (4)) we can regret their disappearance all the more.  Let us be glad that their few remains survive, however, as reminders of the days when gardens, greater even than those of the Borghese and Pamphili, walked the city of Rome.

(2) "He lived twenty nine years, during which he ruled three years, ten months, and eight days.  His body was secretly conveyed into the Lamian gardens, where it was partly consumed on a hastily erected pyre and then buried under a light covering of turf.  Later his sisters disinterred the body, cremated, and then reburied it.  It is well-established, that before this was done, the custodians of the garden were unsettled by apparitions.  In the house in which he died, too, not a night passed without some terror or other, until that house was consumed in a fire." --Suetonius Life of Caligula 59

(3) "In no other thing, though, was he [Nero] more damnable than in the building of his house from the Palatine to the Esquiline, which he first called the House of Passage, but when this was soon burned in a fire he rebuilt it and called it the Golden House.  Of its space and adornment we will offer enough here: its vestibule held a colossal statue of himself that was 120 feet tall, and the space was so large that it had tripled porticoes a mile in length.  It had too a lake like a sea, which was surrounded with buildings that resembled a city.  There were cornfields, vineyards, pastures, and woods, with many sorts of animals, flock and wild alike.  In other parts it was all overlaid with gold, speckled with gems and mother of pearl.  The dining rooms were vaulted with ivory panels that turned to spread flowers and contained pipes from which unguents poured down.  The main dining hall was circular and revolved day and night in imitation of the world.  The baths flowed with water from the sea and the Albula.  When he dedicated his house, all he said in approval was: "it's almost fit for a human being to inhabit."  Suetonius, Life of Nero 31